Louis Vuitton has enlisted Sophie Turner to raise awareness and maximise the outreach of its #makeapromise campaign in collaboration with Unicef.

For the last three years, the brand has sold silver Lockit bracelets to aid Unicef’s mission to help children in vulnerable situations, such as the refugee camps in Cox's Bazar, Bangladesh. With Unicef's assistance, the Bangladeshi government has been able to vaccinate 900,000 children and adults against cholera and save over 263,000 children from malnutrition. The £100 from each £175 bracelet sold only bolsters these numbers.

In comparison to last year’s fluorescent jewellery, the silver Lockit from Sophie Turner is braided with red and white cord and comprises a rabbit charm inspired by her most recent tattoo. "Sophie put so much time and thought into the distinctive design," Mark Devlin, chief operating officer for Unicef UK, said about the actor's adaptation of the Lockit, which was inspired by the the tumbler lock invented by Georges Vuitton in 1890 to protect his clients’ belongings. 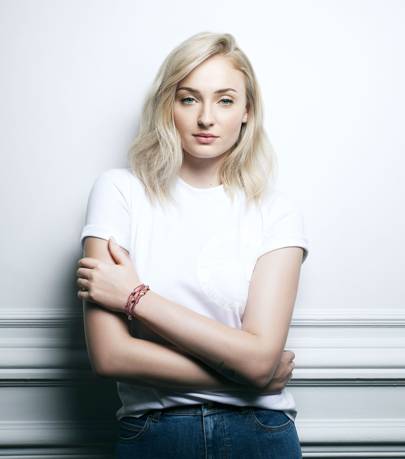 “The idea of the #makeapromise campaign comes from children,” Michael Burke, chairman and CEO of Louis Vuitton, told Vogue of its philanthropic project. “When they make a promise, they mean it, and they seal it with a pinky promise. Children show us a simple way to change the world. It’s all about joining forces worldwide to raise funds and awareness for children. We believe in the word of mouth. Our goal is to reach as many people as possible and to make a real difference.”

Since the launch of the silver Lockit in 2016, the partnership has raised over five US million dollars for Unicef. So, if you're still plotting out your Christmas gift list for family and friends, consider Turner's trinket – it'll go a long way
Posted by FASHIONmode News at 11:47 AM