Under Christopher Bailey, the Burberry Christmas campaign was a no-holds-barred celebration of celebrity-fuelled merriment. The tale of brand founder Thomas Burberry was told via a short film starring Sienna Miller, Lily James and Domhnall Gleeson in 2016. There was a Billy Elliot moment in 2015 with Romeo Beckham, Julie Walters and Rosie and Toby Huntington-Whiteley trampolining to T-Rex’s "Cosmic Dancer". You get the picture. 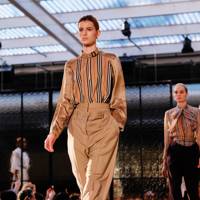 So, what does the festive season hold for Burberry under chief creative officer Riccardo Tisci, who took the helm in March? The list of campaign stars, which were revealed on November 1st, suggests that it will be no less starry, but that it might have a more conceptual feel.

Kristin Scott Thomas, Matt Smith, M.I.A, Naomi Campbell and her mother Valerie Morris-Campbell have all been shot by British artist Juno Calypso. The resulting film and photograph series will be unveiled across all Burberry channels on November 13, but to mark the announcement the brand has released portraits of each cast member wearing Tisci’s debut spring/summer 2019 collection. Each picture is split so the subject's face is presented as a double illusion rather than a classic image. There's not a snowflake or bauble in sight. Make of that what you will.

Posted by FASHIONmode News at 3:30 PM