Monthly product drops are fast becoming a luxury industry norm, and Celine is falling into line: the first tranche of Hedi Slimane’s bag designs will go on sale today, a full four months before his first clothing designs hit the shop floor.

The Frenchman has drip-fed the “Le 16” design, a ladylike, vintage-feel handbag named after the brand’s atelier location on 16 Rue Vivienne, Paris, into the collective consciousness via the honed elbows of a select few – Lady Gaga and Angelina Jolie have been spotted toting it in the last few weeks – but it is now available for public consumption.

Le 16 is joined by the “Triomphe”, a cross-body purse with a double C clasp taken from the 1973 house logo, itself inspired by the Parisian landmark L'Arc de Triomph, and the “C”, inspired by the Seventies-era Celine logo closure of a capitalised letter C with a quilted surface that was once a signature of Celine’s bags in the Eighties. All three bags are available in myriad colour ways and available in sixteen stores – including London’s Mount Street shop – as of Monday. 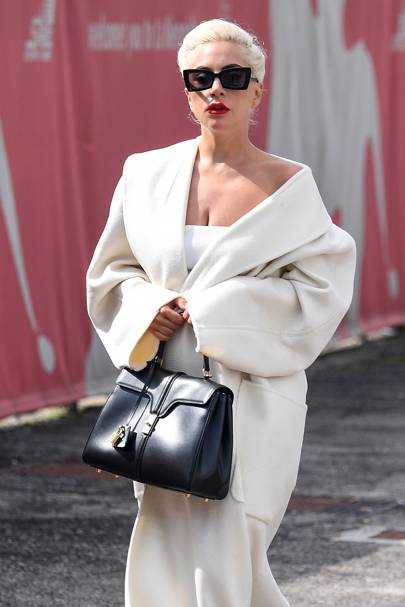 Adopting a drop tactic is something of a volte-face for the brand. Celine under Phoebe Philo was as famous for its luddite approach to commerce as it was for its distinctive minimalist aesthetic. Philo once posited the notion that luxury and digital were incompatible worlds: “I very much like the idea that shoppers experience a Céline product in a Céline store.” The brand only launched its own ecommerce site in December 2017. But, as Slimane seeks to shape the 73-year-old French house in his own image, it seems a new selling tactic is required. He knows how to sell fashion. In 2015, Kering revealed that revenue at Saint Laurent had doubled in the three years since Slimane became creative director. Accessories became the cornerstone of the business: 66 per cent was represented by leather goods and shoes.

Who will buy into Celine’s new line-up? Plenty of women. Cross-body and top-handle bags are best-selling categories the luxury world over, and while the interlocking double Cs, taken from Celine’s 1950s-era logo, reminded some commenters on social media of another monolithic megabrand, the bags also have a distinctly everywoman flavour: simple, smart and bourgeois (in the best way possible) they will appeal to all those women hashtagging Frenchgirlstyle, post after post – as well as their mothers. Stand by for sell-out status.

Posted by FASHIONmode News at 12:06 PM