As a second-generation Chanelbrand ambassador, Lily-Rose Deppregularly steps out wearing Karl Lagerfeld’s latest. But don’t be fooled: the actress is more than just a winsome clothes hanger. Often tasked with wearing the French house’s most daring wares, Depp pulls off clothes others wouldn’t dare, and her most recent outfit tackles one of the most talked-about trends from the Spring 2019 collections.

In London this week for the launch of the special red edition of Chanel No. 5 fragrance, Depp headed to Annabel’s, the exclusive members-only club in Mayfair, in a black jumpsuit with double-c chain detailing on the straps, an oversized Chanel logo on the waist, and cropped leggings in the style of ‘90s cycling shorts. 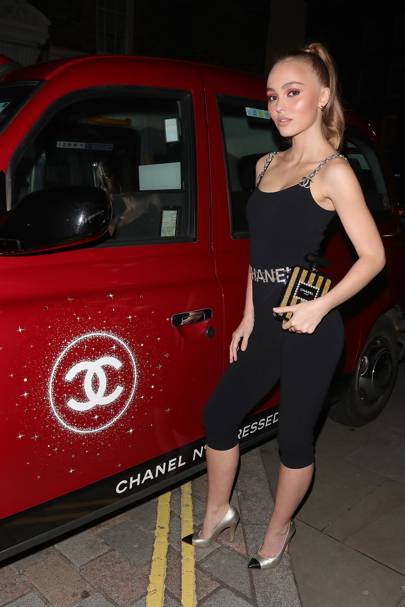 While there have been some early adopters of the look — Bella Hadid and Hailey Baldwin, we’re looking at you! — few have been able to elevate the idea quite like Depp. In head-to-toe black, spiked heels, and a kitschy perfume bottle clutch, Depp looked the part of glamorous host.

She left the club in a glittering overcoat covered in sequins that was pure Chanel and the overall effect called to mind the first time Lagerfeld sent bike shorts down his runway back in 1991 with models like Linda Evangelistaand Emma Sjöberg in remixed little tweed jackets and oversized accessories. As always, Depp made her Chanel moment look beyond easy. Who else could wear an outfit that could carry from the party to next morning’s SoulCycle session with this much swagger?