Burberry And Vivienne Westwood Unveil A First Look From Collaboration

Burberry announced a collaboration with Vivienne Westwood back in July 2018 via an Instagram portrait of Riccardo Tisci, Westwood and Andreas Kronthaler. Now, the brands have revealed a glimpse of what the limited-edition collection of re-imagined British heritage pieces, which will launch in December 2018 and support the rainforest charity Cool Earth, will hold.

Previewed on both Burberry and Vivienne Westwood’s Instagram stories, a mini kilt and lace-up platforms in Burberry’s vintage check are the first pieces to be unveiled from the capsule. A new logo of both brand names merged together – Burberry in black and Vivienne Westwood in red – gives the preview a predictably punk feel. 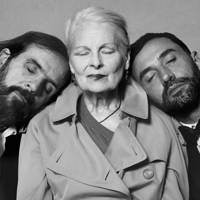 “Vivienne Westwood was one of the first designers who made me dream to become a designer myself and when I first started at Burberry, I knew it would be the perfect opportunity to approach her to do something,” Tisci said in a statement announcing the union, which marks his first collaboration at the helm of the house. “She is a rebel, a punk and unrivalled in her unique representation of British style, which has inspired so many of us. I am so incredibly proud of what we will be creating together.”

More details will be announced closer to the launch, but the tie-up confirms the social-media heavy direction that many assumed Tisci would steer the brand. “I have enormous respect for Burberry’s British heritage and global appeal,” he said upon accepting the position of chief creative officer in March 2018, hinting that he would continue to broaden the brand’s sphere. Westwood, an icon celebrated for her artistry, activism and cultural significance, is a leap forward in the right direction.