Eight Mulberry sunglasses styles inspired by eight British style icons: it’s fair to say that Johnny Coca has drunk the Kool-Aid since joining the house from Céline in 2015. The Spaniard has been waiting to launch lenses for some time – and, accordingly, workers in the company’s West Country factory have been sporting John Lennon and Kate Moss-inspired sunnies around Somerset to ensure the creative director succeeds in his mission to make a pair to suit everyone.

“I have been designing sunglasses for the last 15 years so it’s part of my process when designing a season,” Coca tells Vogue ahead of the February 13 launch. Eagle-eyed fashion fans will have spied opticals on Mulberry’s models in past catwalk shows, as Coca has used the accessory “to complete the silhouette and give the attitude of the season”. It was not until a license agreement with Italian eyewear specialist De Rigo was signed, however, that a production process began in earnest.

The frames fall into categories that each complement the ’60s-inspired spring/summer 2019 collection. “This was an era when distinctive eyewear silhouettes became synonymous with their wearers,” Coca shares of his sojourn to the Mod mood of the decade when researching the ready-to-wear. “We also looked at modern icons and the attitude that comes with wearing sunglasses. The bold styles add a fresh, playful edge to these retro influences.” 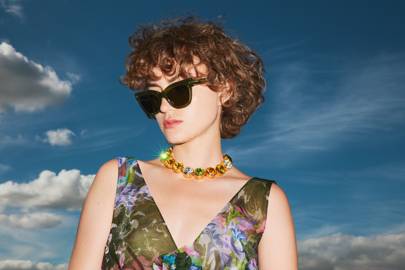 The Kate, Jane, Emma, Charlotte and Gian styles come in chunky acetate, while Tony and Lenny are shaped from a lightweight metal wire. Enyd, a hybrid silhouette, also borrows the colour palette from the mainline collection and comes in hibiscus red and sorbet pink, as well as sensible blacks and metallics.

Is Coca confident he has created something different from the myriad sunglasses collections in the competitive accessories market? “They reinforce Mulberry’s statement and DNA,” he states matter-of-factly of not creating a flash-in-the-pan product. Consumer response to his reinvigorated accessories – leather goods have thus far been a priority – has been positive. “I think our customers can see a consistency across all the categories, which aim to keep the Britishness, protect the heritage and progress with modernity”. Tapping into Mulberry's quintessential country roots again will no doubt appeal to an international audience too. Coca, from Spain via Paris to Somerset, is a savvy businessman indeed.

Posted by FASHIONmode News at 5:18 PM