Lady Gaga’s stylists Sandra Amador and Tom Eerebout, who took the baton from Brandon Maxwell in 2018, plan the popstar-cum-actor’s public-facing looks months in advance. Concepts are proposed, dreams are brought to the table and, along with hairstylist Frederic Aspiras and make-up artist Sarah Tanno, they “evolve an idea into something bigger than [themselves].” But, for Gaga’s SAG Awards 2019 look, the concept-to-carpet phase was far simpler. In fact, Amador and Eerebout found the gown just days before the ceremony at Paris Haute Couture Fashion Week.

The glittery swimming caps and the splendour of the circus theme must have turned the styling team’s heads, because look 61 in the Dior spring/summer 2019 show quickly made its way from Paris to Los Angeles for the Best Actress nominee to wear. Gaga, however, skipped Maria Grazia Chiuri’s hyper-embellished take on functional hair protectors and chose to make a splash with an oxblood lip and a choker from Tiffany & Co.'s Blue Book 2019 collection. The naval-grazing dress slit was also shifted from the front to the left to elongate the line from her leg down to her Tippex-white Jimmy Choo Romy pumps. 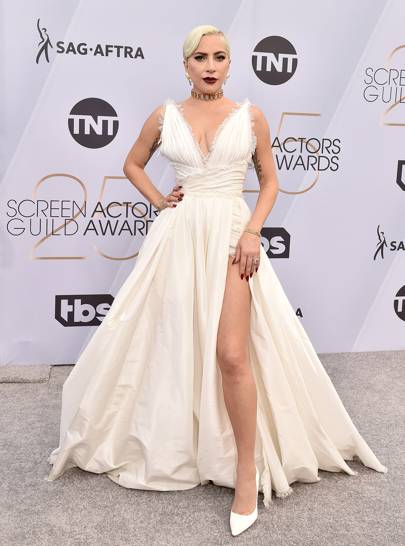 The A Star Is Born actor might have missed out on the top prize to Glenn Close again, but Gaga, in her straight-off-the-catwalk couture, certainly didn’t look like she’d run the gamut of awards season yet. “There’s never been a limit of what you can achieve with her,” Eerebout told Vogue before the string of awards shows had begun. “You can put any ideas on the table because she wants to tell a story. There aren't a lot of people that can pull off the things that she does.” With the Oscars in sight and a host of new couture collections at her fingertips, what will Gaga wear next?

Posted by FASHIONmode News at 7:08 PM