On a day when some of the biggest names in British fashion were showing their autumn/winter 2019 collections in London, protestors were chanting, “There’s no fashion on a dead planet.” During Victoria Beckham’s show at Tate Britain on February 17, they blocked Mercedes-Benz-sponsored cars, dressed in grass coats, and carried signs that read “Ethical is always on trend,” among other pointed slogans.

Extinction Rebellion, the environmentalist group that made headlines in November by shutting down the city intermittently for several days, “swarming” areas of heavy traffic and blocking major roads and bridges in order to call attention to the climate change crisis, had disrupted the runway. A decentralised coalition now with hundreds of outgrowths in dozens of countries, the founding British faction turned its sights to one of the world’s most wasteful industries, during one of its most important weeks.

“Everybody needs clothes, but we don’t need as many clothes as we make today,” says Clare Farrell, an Extinction founding member and environmentalist who helped lead the LFW actions. “The reason why we’re going to the fashion industry is because it is one of the most polluting on earth. It is using a vast quantity of the carbon budget that we have left to produce products that we don’t need.”

Clothing underutilisation and waste costs the global economy £400 billion a year, according to the Ellen MacArthur Foundation. The extreme linearity of the textile industry means that large amounts of nonrenewable resources are used to produce clothes that are most often incinerated or turned into landfill. Textile production creates 1.2 billion tons of greenhouse gas emissions annually.

So the need for industry reform is huge. “If you look at the consumer price index, it’s the only commodity that has pretty much flatlined in price in the past 30, 40 years,” says Farrell, who is also a lecturer specialising in fashion and sustainability, “so of course people just buy more of it.” But the vast majority of consumers who are buying fast fashion or high street retail don’t think about the consequences. “It’s important for people who don’t think about where things come from to be reminded,” she continues. “It’s possible that clothing relies solely on agriculture or petrochemicals for raw material, which are the two spaces that I would suggest are going to be a very volatile industry in the future. There’s a duty of care for people who understand that to educate not just the public, but even young designers who might not necessarily think about how they won’t be able to make cotton clothes when there’s no topsoil and no water.” Farrell cites UK designer Bethany Williamsas an up-and-comer who is “very principled – she is receiving this year’s Queen Elizabeth II Award for British Design.” 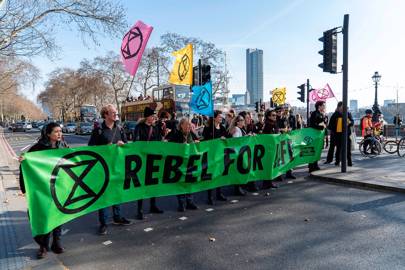 Now Farrell and her cohorts are asking players at the highest level of the industry to do their part. Last week, Extinction addressed the British Fashion Council directly via an open letter, calling on it to “use its influential position to tell the truth about climate change.” It insisted that the BFC declare a climate emergency (London’s mayor, Sadiq Khan, declared one last year, after Extinction made its debut). Though a formal declaration has yet to come out of the appeal, it did get Farrell and others an audience with Caroline Rush, the British Fashion Council CEO, ahead of the shows this season. On the phone to Vogue that same day, Farrell said organisers stressed that they weren’t targeting individuals or brands, but the industry as a whole: “And the response is almost always to make something new. That’s the opposite of what we need to do.”

What’s more, the fashion industry’s current rhetoric on sustainability might actually impede systemic overhaul more than anything else. Already this February, London Fashion Week played host to sustainability-focused events, with Mother of Pearl designer Amy Powney partnering with BBC Earth and the BFC in a series of talks on micro-plastics. “I absolutely advocate for material innovation and kelp farms and a diversity of fibre sourcing,” Farrell says. “There’s tons of stuff going on, and the issue is that that’s just not enough.” She thinks that schemes like vintage resale or return incentives at stores make consumers believe clothing is being “recycled” when it really isn’t. And fashion’s penchant for turning political movements into viral runway moments and T-shirt slogans makes Farrell skeptical. “The fashion industry is so good at co-opting anything and then making it fashionable and then selling you something,” she notes. Though she hopes that Sunday’s actions recruited some “fashionable allies.”

But did it? Designers have yet to speak out in support of the actions, though clearly Extinction Rebellion has made its presence felt. Ultimately, no one was arrested at the demonstrations, which in addition to blocking roads outside Beckham’s show, shut down traffic on the Strand. Police and rebels cooperated to let emergency vehicles through.

The real change will come when “less is more” becomes not just a design adage but an ethical impulse. After visiting a recent exhibition of new designers at Somerset House, Farrell admitted to feeling a twinge of missing creating things. “It made me feel really sad, because I looked around and thought: Oh, I really miss making things and feeling able to,” she says. But as an educator and organiser, she now has a new creative outlet. “What we’re trying to say to individual industries is this: Governments are not going to do this for us. You need to think very hard about the consequences of the business that you’re in and have urgent conversations with everybody whom you encounter about what could be done.”

Posted by FASHIONmode News at 4:32 PM