Billy Porter On Why He Wore A Gown, Not A Tux, To The Oscars

At tonight’s 91st Academy Awards in Los Angeles, California, Posestar Billy Porter defied fashion norms by stepping out onto the Oscars red carpet in an unapologetically fabulous gown. The custom creation by designer Christian Siriano included a sharply tailored tuxedo jacket overtop a full-skirted strapless velvet gown. A play on masculinity and femininity, the look challenged the rigid Hollywood dress code and was boundary-pushing in all the right ways.

For the actor and singer, the fashion choice was deeply personal. Below, Porter reflects on coming to terms with his queer identity and how his fashion choices have became a powerful tool for self-expression and representation.

"I’ve always been inspired by fashion. My grandmother, my mom—they were always stylish. I grew up loving fashion, but there was a limit to the ways in which I could express myself. When you’re black and you’re gay, one’s masculinity is in question. I dealt with a lot of homophobia in relation to my clothing choices. [Even] when I had my first working contract at A&M Records, I was silent for a long time. I was trying to fit in to what other people felt I should look like. When I landed a role in Kinky Boots, the experience really grounded me in a way that was so unexpected. Putting on those heels made me feel the most masculine I’ve ever felt in my life. It was empowering to let that part of myself free.

"Now I’m in a space where, being on Pose, I’m invited to red carpets and I have something to say through clothes. My goal is to be a walking piece of political art every time I show up. To challenge expectations. What is masculinity? What does that mean? Women show up every day in pants, but the minute a man wears a dress, the seas part. It happened to me at the Golden Globes [when I wore a pink cape], and I was like, really? Y’all trippin’? I stopped traffic! That Globes outfit changed everything for me. I had the courage to push the status quo. I believe men on the red carpet would love to play more. This industry masquerades itself as inclusive, but actors are afraid to play, because if they show up as something outside of the status quo, they might be received as feminine, and, as a result, they won’t get that masculine job, that superhero job. And that’s the truth. I’ve been confronted with that. 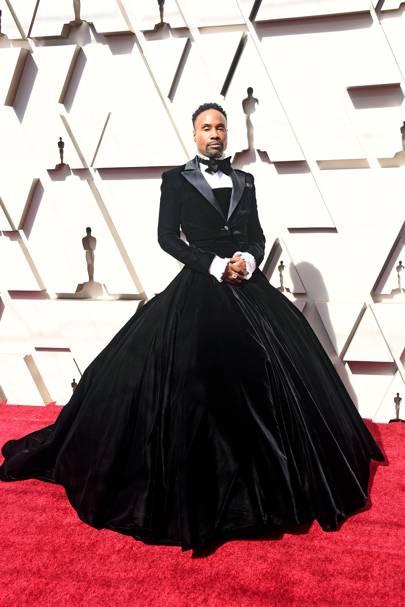 "I’ve always wanted to wear a ball gown, I just didn’t know when. I was inspired [this past New York Fashion Week] because there’s a conversation happening about inclusion and diversity. There were so many people of different races and voices. At Palomo Spain, genderless boys floated down the runway in gorgeous chiffon dresses and capes. It was lovely. Fashion has the ability to touch people in a different way. I also went to Christian Siriano’s show. I’ve loved him ever since he was on Project Runway. He was the first person who understood that everybody wears clothes—not just size zeros. He’s become the go-to person for all of the Hollywood women who are rejected by the fashion industry. The fashion industry rejects you if you’re above a size four, it’s ridiculous! I’ve always wanted to work with [Siriano]. I got this Oscars gig [hosting a red carpet pre-show], and at his party after the show, I just dropped it in his ear and said, “Do you think you’d have time to make me a gown?” And he said, “AAAAA-BSOLUTELY.”

"We wanted to play between the masculine and the feminine. This look was interesting because it’s not drag. I’m not a drag queen, I’m a man in a dress. He came up with a tux on the top, and a ballgown that bursts out at the bottom. I wore it with Rick Owens shoes. Rick is very gender-bending and rock’n’roll. It’s a high, 6-inch chunky boot that makes me feel really grounded. And I rocked some Oscar Heyman fine jewellery with it. They’re known for coloured jewels and gemstones. I wore their brooches for my Golden Globes look.

"Since I had a job to do that night, we came up with a [more practical] option for the actual [gig]. Christian had a day-to-night idea, where I would walk the carpet in the gown, but change into a tuxedo and palazzo pants for my interviews.

"[At the first fitting in the gown,] I felt alive. I felt free. And open, and radiant. And beautiful! Which has not always been the case for me. I haven’t always felt so good about myself. It really is astonishing how much of an affect clothes have on your spirit. My aunt Dorothy used to always say, “Dress for the job you want, not the job you have.” That’s why I look good every time I leave the house. I want to run shit. From this [Oscars] moment, I want people to understand that you don’t have to understand or even agree with other people’s authenticity or truths, but we must all respect each other.
Posted by FASHIONmode News at 10:17 AM