The first model out at Simone Rocha hinted that something was up: Conie Valese, a New York-based artist, is not your typical Rocha wraith. Then Chloë Sevigny, another New Yorker, as well as actress, director and all-around style legend, stepped out onto the parquet flooring of the Royal Academy, her trademark sexy smirk fixed in dark plum lipstick. By the time the model-turned-director Lily Cole appeared – her first appearance on a catwalk in well over five years – the audience was in raptures. Rocha had scored the best casting at LFW. It was only day two.

“This collection I was thinking about security, privacy and intimacy. That made me think of the human body and I thought it was really important to show it on all these different bodies,” Rocha told Vogue, backstage after a show that put the female form centre stage. Elsewhere in the diverse line-up, assembled with the helm of casting supremo Samuel Ellis Scheinman: Helmut Newton muse Marie Sophie Wilson, ’80s-era model Jeny Howorth, '90s counterparts Kirsten Owen and Jade Parfitt, the singer Evangeline Ling, Lindsey Wixon, plus a roster of current It models including Adut Akech, Fran Summers and Primrose Archer, as well as Pre-Raphaelite beauty Tess McMillan. 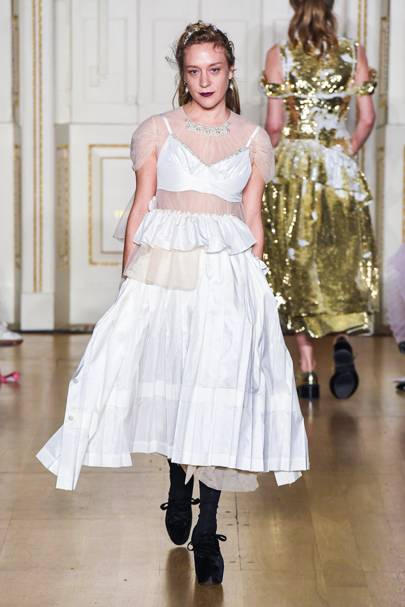 “I was thinking about all these women and it was all about their shapes, and how to make them look their most beautiful,” said Rocha. “And also looking at Louise Bourgeois’s work, and how all her shapes could be manipulated. So, these phallic shapes could be made into jackets but then belted, they were still beautiful and kind of almost late ’50s.” The mood was high on female empowerment, Rocha’s clothes instantly imbued with an elegant grit lent by curves, wrinkles and grey hair.

Rocha was particularly enraptured with Howorth: “She was so inspiring. She came in and put on the sequin dress, and she was so modern and poetic. It was mind-blowing.”

Posted by FASHIONmode News at 4:18 PM