After starting her fashion career in earnest at the age of 14, Turlington Burns hung up her heels to pursue her studies in 1994 aged 25. While her contemporaries Cindy Crawford and Linda Evangelista were at the peak of their careers, the supermodel chose to enrol in a Comparative Religion and Eastern Philosophy course in New York. "I thought about it for a long time,” she told fellow model Iman in an interview with Humanity magazine in 2015. “I remember somebody telling me that they were in a location van and they saw me walk by with my backpack, and they were like, 'Oh, poor thing.' And I'm thinking, 'Poor thing?' I'm getting my education, you fools.”

Turlington Burns, who turned 50 on January 2, has never been out of fashion’s gaze, however; an armful of campaigns for household-name brands including Maybelline, Louis Vuitton and Calvin Klein – she even featured in a Calvin Klein Eternity fragrance advert alongside her husband Ed Burns – have kept her supermodel status intact. As she explained to Iman: “I really haven't fully given modelling up, but in my mind I did, because I went back to school and moved on in my life.” 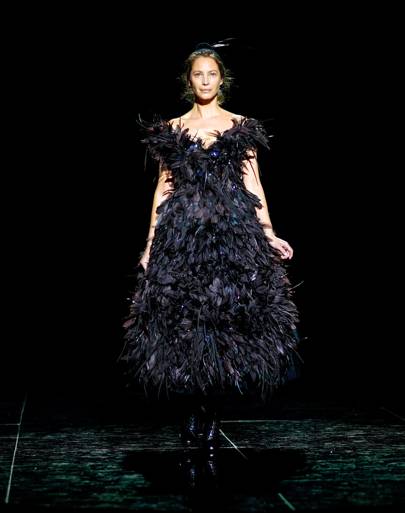 The black feathered ballgown in which Turlington Burns closed the autumn/winter 2019 show was certainly a departure from the previous Marc Jacobs clothes she has worn on his catwalk. The last time she made a Marc Jacobs exit was in 1993, when she wore his famous grunge collection for Perry Ellis alongside Naomi Campbell and Kate Moss. February 13 2019 saw her walk alongside the new generation of supers, including Karlie Kloss, Gigi Hadid and Kaia Gerber, all of whom Turlington Burns later thanked via Instagram for inspiring her daughter, Grace.

“I turned 50 this year and have arrived at a place where 'why the F not' is the answer that comes up when I ask myself questions," she wrote. "I have a 15-year-old daughter who I desperately want to see and hear me and this is a medium that 'speaks' to her. So, thank yous are in order, @karliekloss @gigihadid and @kaiagerber and all the lovely young women I have met briefly in the recent past or met tonight. You are all women I would want my daughter to emulate in your grace, confidence and elegance.”

Posted by FASHIONmode News at 4:04 PM