It’s official: Gwyneth Paltrow is bringing Goop’s wellness knowledge to Netflix. The docuseries, which is slated for release later this year, will see the Oscar-winning actress host 30-minute episodes alongside Goop’s chief content officer Elise Loehnen with health practitioners, doctors and researchers weighing in on mental, physical and sexual health, too.

“We were speaking to the platform question, and where our people are,” Loehnen told Variety about plans for the currently untitled series. "They’re watching Netflix. Some of the more strategic, bigger stories we want to tell require a TV budget. Obviously, there’s no better partner in that.” 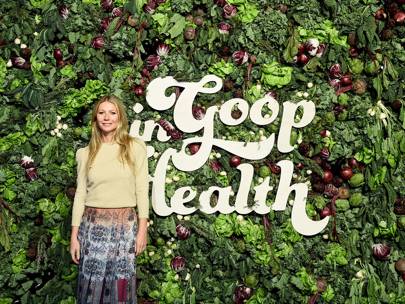 Additionally, Paltrow has teamed up with Delta Airlines to promote the brand’s podcast with the hope of it reaching over 18 million listeners onboard 600 aircrafts. Paltrow has previously discussed physical and spiritual wellness – the topics she brought to the fore when she launched Goop some 10 years ago – with Oprah Winfrey and Misty Copeland on the audio show.

Plans are also afoot for the brand’s In Goop Health wellness summit, which is coming to London for the first time in June 2019. The event will include panel talks, fitness classes and discussions involving alternative medicines. “Goop was born in London and it’s always been sort of a second home," Loehnen told Vogue following the announcement. "People are really interested and curious and there is probably equal interest in wellness in London [as there is in LA] which is not yet matched by what’s available. It was a no-brainer to bring In Goop Health to London.” Now, thanks to Netlix, interest in Goop is about to go even more international.

Posted by FASHIONmode News at 8:44 AM