It took a team of weavers three days to construct and seven days to erect the The Tube, the electric blue woven climbing frame that comprises Anya Hindmarch’s latest London Fashion Week installation. Following the wild success of last season’s Chubby Cloud, the giant squishy beanbag that Hindmarch installed beneath the famous Rubens ceiling at Whitehall’s Banqueting House for the benefit of tired fashion editors as well as the general public, the Weave Project was a more energetic proposal: attendees can bomb through the suspended climbing nets, in just “three minutes”, claims Hindmarch. She’s tested it, of course.

“It’s a real feat of engineering,” she told Vogue, on a tour of the top floor of London's Brewer Street car park, where the nets were fixed from ceiling to floor to create twisting tunnels. The creation of artists collective Numen/For Use, 3,000 metres of rope were required to construct the suspension, while 11,000 square metres of net were commandeered to create the tunnel structures, which will be repurposed as part of the collective's continued installations in art galleries. The Tube is intended to tie in – quite literally – with the relaunch of Hindmarch’s Neeson collection, comprising a hand-woven leather cross-body bag and a large tote (it takes six days to make one bag) that can be customised with initials, tassels and symbols. 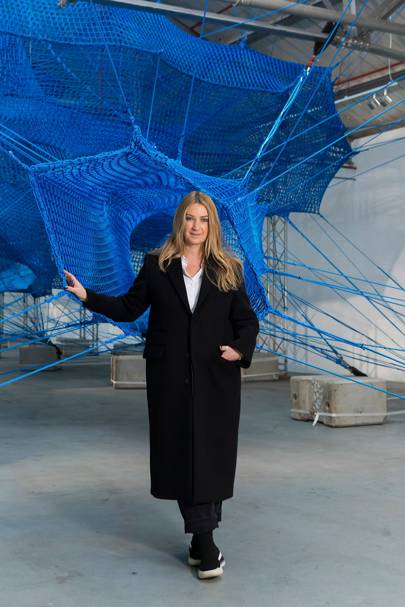 Hindmarch is leading the way with consumer-facing experiential initiatives. Having switched to a direct-to-consumer model in 2018, the Weave Project is characteristic of her inclusive approach: it will be open until Tuesday 19 February, and members of the public can sign up to 30-minute slots – more than enough time to accommodate kicking off shoes, donning a boiler suit, and roaming through woven tunnels. The bags will be on sale in a room adjacent to the Tube, along with Hindmarch's signature kooky confectionary - think waffles with googly eyes.

“We want all our brand experiences to be interactive, and to involve our customers,” Hindmarch said. “It's interesting actually how different it looks from the inside, spatially. It’s meant to help you unwind, feel like a child again.” Judging from the grins on the faces emerging from the net, she’s succeeded.

Posted by FASHIONmode News at 4:19 PM