Jeremy Scott, A Designer Built For The Instagram Age

Two things that Jeremy Scott was made for? Social media and Moschino. The American designer’s 2013 appointment at the Italian heritage label was the ultimate career coup for someone whose creative tendencies lean towards all things feel-good-fun and pop-culture cool. Amidst the quickfire comings and goings of creative directors during the past few years, from Raf Simons at Dior to Hedi Slimane at Saint Laurent, Scott - a Pratt Institute graduate who came to the role armed with nearly two decades of experience running his own eponymous brand - has stayed put.

“I’ve been having the time of my life,” says the Kansas City-born designer, who describes the fit as “hand in glove”. We’re speaking by phone from the Moschino studio in Milan, where he is putting the final touches on Moschino’s Autumn/Winter 2018 collection. Scott is the incarnation of everything Moschino was under its original founder, Franco Moschino, his own aesthetic so incredibly in-keeping with that irreverence and fashion satire that set the brand apart from its ‘80s contemporaries at the time. “I never really imagined this [role] until it was offered to me and then I realised... there isn’t another person who could do it or do it better,” he says. “I have a respect for Franco and a respect for his legacy and I wanted to do something that would honour that and bring back the lustre to it.” 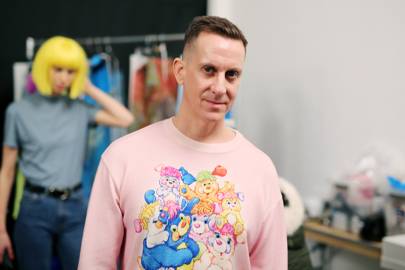 Where Franco did teddy-bear toys on dresses and silverware on suits, Scott continues that trompe l’oeil trope of surrealism. McDonald’s, My Little Pony, Barbie and Sponge Bob Square Pants have all played muse; candy wrappers and household objects have been fashioned into ball gowns. He sees the world through an iconographic lens and his clothes, informed by tongue-in-cheek visual puns, embody humour, sexiness, are whimsical and playful yet come with a thought-provoking social streak.

While some designers and pundits have bemoaned the impact of Instagram on fashion - arguing that it favours photogenic, bi-dimensional clothes over those with more nuanced artistry - Scott has an automatic affinity for it. “I think I was built for social media and not in the sense that I’m a selfie person,” he says. “Social media now is really about Instagram, it’s about a picture that is less than the size of the palm of your hand. What is impactful is not an all-black look. It’s about being colourful and bold and my work was already that and has always been that way,” he reflects. “It’s kind of like that world has caught up to me.”

Posted by FASHIONmode News at 3:27 PM