"It was an exciting and challenging experience I'd been wanting to have for a while," Dakota Fanning told Vogue of her directorial debut for Miu Miu’s Women’s Tales latest short film, Hello Apartment. "You want to get it right, and you're constantly worried that you're messing something up. I found I really enjoyed the process of putting together the film in post-production. I loved the editing, the sound mixing, getting to work with a composer and talking about music. As an actor, you're not really involved with those elements. That was all new for me and such a learning experience.”

Miu Miu's short-film series - that in the past has seen the likes of Chloë Sevigny, Ava DuVernay and Agnès Varda behind the lens - was created to celebrate femininity in the modern day, so what does that mean to Fanning? "I think it's so different to each and every person, and it changes for me from day to day," she explained. "Society is having this conversation about how people express themselves, what makes them feel like themselves, what clothes represent who they are. I think the most important thing about what we're learning is that it changes all the time.”

With major figures using opportunities like the Baftas and the Golden Globes to make a statements in support of movements like Time’s Up through their sartorial options, what’s Fanning's – who has long been admired for her personal style and as a leading light of young Hollywood – take? "I wasn't at any of those events where women wore the black dress code, but I think that however people choose to express themselves and their femininity, feminism or support of women's rights is valid. I support women supporting other women. I think that having conversations about these inequalities and getting the message out there is always a good thing. It's a conversation that we have to keep having." 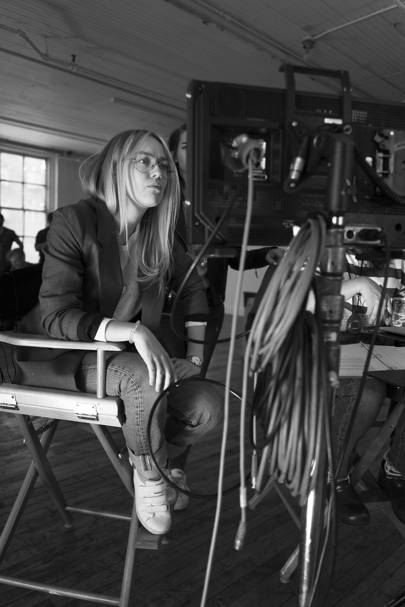 Despite being just 23, the actress - and budding director - already has over 17 years of experience in the industry. "I think the world has changed a lot, and so I think ultimately all industries change," she says looking back on the time since she made her cinematic debut. "One of the most obvious ways is just thinking about social media and how that's changed the world. For better or worse, it’s changed every industry.”

A supporter of the #femalefilmmakerfriday hashtag, Fanning stresses the need for female representation in film to be addressed – as the lack of women included in the 'Best Directors' category at both the Golden Globes and the BAFTAs made clear. "I think it's so important," Fanning adds. "I think that different points of view and different perspectives are so important in art and in the stories we tell. I think having more female representation is important and necessary. With this project it was exciting to feel a part of something. I was a female filmmaker that was telling a story about a female. I'm proud of that."

Now taking on a new position within the industry, it’s clear Fanning remains fond of her field. "I think the most important part about any job is that you really should love it," she explains. "Ultimately, on a film set is where I feel most comfortable and most excited. It’s where I have the most fun even when it's not glamorous. That's the other thing - if you think that it's glamorous, you should probably go find another job."
Posted by FASHIONmode News at 4:44 PM