You’ve Heard The Savage X Fenty Hype, Now See What The Show Is All About

Rihanna’s second Savage X Fenty outing at New York Fashion Week was arguably the most hyped, and least publicised, show of the season. Phones and social media were banned by the musician-turned-mogul for one reason: the presentation will be aired in a blockbuster video package on Amazon Prime on September 20. The self-professed bad gal has beaten Victoria’s Secret at its own game.

“Can you feel the ⚡️⚡️?! Can you feel the VIBEZ??” asks the brand in a new teaser showing the pre-show build-up. Models, actors and dancers – including 21 Savage, Alek Wek, Aquaria, Bella and Gigi Hadid, Cara Delevingne, Joan Smalls, Laverne Cox, Normani, Paloma Elsesser, and Slick Woods – wearing black, green, purple and red underwear sets offset with heavy jewellery and metallic make-up pump each other up en route to the stage. Neon lights are flashing, smoke canons are working overdrive and the base is thumping as Rihanna cries, “I’m ready!” to her entourage. To say it looks like the singer is prepping for a stadium tour comeback is an understatement. 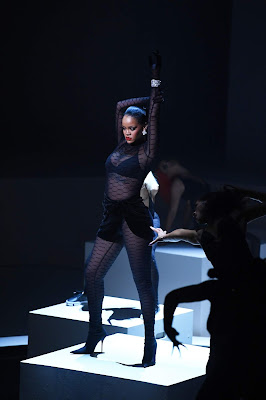 As well as performing herself, Rihanna invited Halsey, Migos, DJ Khaled, Big Sean, A$AP Ferg, Fat Joe, Fabolous and Tierra Whack to provide the soundtrack. With Willo Perron as creative director – the man behind all of Rihanna’s performances, and a collaborator of Kanye West, Jay-Z and Florence Welch – it was a recipe for success, where the only ingredients were attitude and individuality.

The autumn/winter 2019 collection drop will coincide with the air date of the film on 20 September, with the inclusive pieces in sizes ranging from 32A-42H and XS-3X, available at Amazon.com/savagexfenty after fans have watched the spectacular. “Be sure to tune in sis!” urges the brand via Instagram. As if anyone needed prompting. Victoria’s Secret, who?

Posted by FASHIONmode News at 8:20 AM