The Loewe SS20 Collection Is Brimming With Ethereal Creations

Jonathan Anderson’s reign at Loewe has been defined by a quietly confident, cerebral femininity that has proved highly commercial. For spring/summer 2020, the creative director has pushed these “extremes of femininity and luxury to ethereal heights” in a collection that “alludes to a patrician elegance,” as per his show notes.

On the runway, these poetic tropes were realised in dresses constructed from decorative fabrics, including, but not limited to guipure, Chantilly and marguerite lace, and Japanese satin. The most whimsical were in white, with bonus additions of macramé, organdie bows and embroidered flowers. Whisper it, could Anderson be dipping a tentative toe into the bridalwear pool? A babydoll gown with translucent embellished overlay struck an undeniably “angelic” note recognised by Anderson himself backstage. 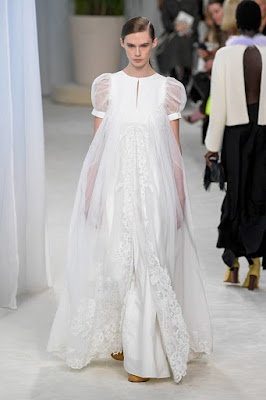 “I wanted [the model to look like] she was ethereal, hovering around [wearing] something that was light, but at the same time, something that moved as she was walking,” the designer told press. “[The construction was] more technical this season. You couldn’t rely on the raw seam. You had to rely on precision.”


Inspiration came via 16th and 17th century silhouettes, which Anderson likened to nightdresses and, indeed, the notes referenced “deconstructing elements of boudoir vocabulary”. For anyone watching from the sidelines or on the Loewe.com live stream, the series of creamy confections – particularly the aforementioned angelic look 30; look 37, which featured an embroidered collar to die for; and the closing look 45, a silk gown blooming with discreet posies – meant that you couldn’t help but hear the chic bells chiming for the modern Loewe bride.