Packing for a royal tour poses myriad components to consider, from the diplomatic implications of the designers chosen, to the suitability of the clothing for the range of engagements unfolding in the public eye. The Duchess of Sussex began her 10-day trip to South Africa with two looks that showed she has done her homework on the continent’s fashion scene. Underlining both the Mayamiko and Veronica Beard dresses are Meghan’s growing awareness of sustainability, and the part she can play in promoting a green message. If both sartorial gestures continue to play out, the visit to one of the world’s exciting and under-publicised fashion epicentres will be interesting to watch.

First up, Meghan and Prince Harry visited Cape Town’s Nyanga township and met the team behind The Justice Desk, a human rights organisation that helps children who have been victims of rape and abuse. During the afternoon, which saw her witness a self-defence class, the Duchess wore a monochrome printed wrap dress by Mayamiko, a fairtrade label based in Malawi. The “Dalitso” style, which has now sold out, is made from ethically sourced cotton stitched in the Mayamiko Fashion Lab, a workshop that provides local artisans with training, education, nutrition and sanitation. By scanning the QR code on the garment, Meghan can see the people who made her clothing – many of whom will go on to start their own businesses after receiving mentoring and access to a micro-finance scheme from Mayamiko. 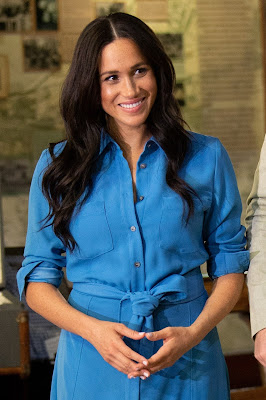 Meghan’s dress, which she offset with Castañer “Carina” wedge espadrilles, chimed with the message of her newly launched capsule collection for women in collaboration with the charity Smart Works. Titled The Smart Set, it comprises a Jigsaw suit, a John Lewis & Partners bag, a Marks & Spencer dress and a Misha Nonoo white shirt, and is designed to foster a sense of community. As Mayamiko continues to grow, founder Paola Masperi is building her own collaborative network with embroidery she has hand-picked from Sri Lanka, textiles from Myanmar, reclaimed jewellery from Laos and upcycled silk from Italy. It will not be surprising if the Duchess – who referred to herself as “a wife, a woman, a woman of colour and a sister” as well as a royal during The Justice Desk visit – looks to Masperi’s offering again as the tour continues.

From Nyanga, the couple travelled to the District Six neighbourhood, an area from which some 60,000 people were forcibly extracted under Apartheid. The Duchess listened to the stories of former inhabitants wearing a brilliant-blue Veronica Beard shirt dress that she first wore in Tonga. Since the royal tour around the Pacific region last autumn, Meghan has used pictures of herself wearing the dress for posts on @sussexroyal. She paired the button-down with the same pair of Castañer heels worn earlier in the day, in a subtle statement that suggested rewearing items will be key to her royal tour looks, and indeed her personal wardrobe going forward.

Although Meghan has worn a handful of conscious brands before – from her Stella McCartney wedding reception dress to the Veja trainers she swears by – practicing a circular approach to dressing is a positive contribution the Duchess can make to the wider conversation about fashion's impact. As day two commences, and sightings of the mother-of-one wearing a favourite Madewell denim jacket and Brother Vellies “Huaraches” woven flats emerge, the tour seems to be a marked shift from the 38 outfits she wore to Australia, Fiji, Tonga and New Zealand last year. Watch this space.

Posted by FASHIONmode News at 8:36 AM