"I didn't want to just do a book signing, I wanted it to be more of a 'happening'," photographer Craig McDean tells Vogue ahead of the launch of his latest monograph, Manual, a celebration of his twin passions: fashion and fast cars. Sure enough, rather than its creator sitting at a table behind stacks of books, McDean marked the launch of Manual with a cocktail party at Byredo's chic Lexington Street store in London – hosted by the photographer together with British Vogue editor-in-chief Edward Enninful and Byredo's creative director Ben Gorham – and the unveiling of a covetable collection of associated merch.

McDean teamed up with Gorham, his friend and long-time collaborator, to come up with a collection of products and special editions of the book to celebrate its publication. On Monday night in London, guests including Naomi Campbell – fresh from the success of her Fashion For Relief extravaganza on Saturday night – and Karen Elson browsed scarves, caps, lighters and beer coolers emblazoned with flames.

The book, published by Rizzoli, places the photographer's high-glamour shots of some of fashion's best known faces against sleek American muscle cars and steel engine parts. "I'm not putting them [the models] next to horses because I can't ride horses! I grew up around cars," says McDean, a petrol-head who worked as a mechanic in his native Middlewich, Cheshire, before he swapped the garage for shooting Gucci campaigns. 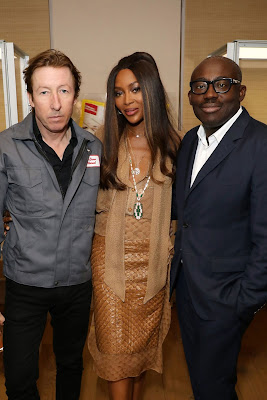 "The cars feel like they're moving [in the images], they're alive. They're moving more than the fashion pictures, in a way," says McDean, who delighted in juxtaposing hyper-feminine fashion imagery with photographs of high-performance cars. "The car racing scene is quite macho, especially in America," he says. "Somehow, it gels."

Canada-born Gorham, who shares McDean's love of race cars, said the nostalgia-infused collection of memorabilia was a celebration of his friend's work. "I've alway been a fan of Craig's work," he tells Vogue on the day of the event. "There was something really human in a lot of his early work that I fell in love with. That became the foundation for what we were going to do together going forward."

Of the iconic images featured in Manual, Gorham singles out a picture of an 18-year-old Karen Elson – a guest at last night's party – as his favourite. "Baby Karen, as I call it," he says. "It's a really beautiful picture of Karen from when she was 18... it's actually shocking to see how little she's aged seeing her here tonight!"

Monday night's event was the starting point of a global tour to introduce Manual and its merch between now and the end of the year, taking in Paris, Montreal, New York and Seoul.