Late last year, Alexandre Arnault, LVMH scion and chief executive of Rimowa, asked the designer Kim Jones to appear in an ad campaign for the German luggage company. Jones, who is Dior Men’s artistic director and a passionate traveller, agreed. The campaign led to a joint capsule collection. And now Dior is considering a new product category: luggage.

On Thursday on the Champs-Élysées, Dior and Rimowa will reveal the collaboration that Jones concocted while the luggage maker's ad campaign was underway. The small grouping of suitcases that will be on display is unabashedly luxurious and aims to be hypebeast material, with prices ranging from €1,900 for a small clutch-like bag called the Personal to €3,600 for a larger bag called the Trunk in a gradient blue. One made-to-order piece, called the Champagne case and sold price-upon-request, contains a leather ice bucket and champagne flutes and will be delivered with six bottles of Dom Perignon. It was conceived with picnicking in mind, says Jones, who doesn’t drink champagne himself. “I wanted something really decadent,” he says.

Pressing to reach young luxury consumers, Dior has also worked with Snapchat for the roll-out, developing three Snapchat lenses that will also be revealed on Thursday. These lenses will allow users to wear a face mask covered in the Dior Oblique pattern – which is a recurring logo across the suitcases. One lens, accessible only at the Champs-Élysées boutique, will reveal the Personal clutch in different colours in 3D.

Following the Paris reveal, the collection will be similarly launched in Japan, China, Miami and Dubai before being made available globally in January, according to a spokeswoman. If the Rimowa collaboration is successful, Jones hopes to add luggage to Dior’s regular product offering. Trained at Central Saint Martins, he formerly led men’s design at Louis Vuitton, where luggage is at the heart of the brand’s origin and product array. Dior, despite its extensive offering of handbags, backpacks and messenger bags, lacks a luggage category.

Luxury travel goods are fertile territory for brands, with the category predicted to grow by 33 per cent to $6.4 billion by 2023 from $4.9 billion in 2018, according to Euromonitor. “If there’s a demand for it, why not?” says Jones. “I came from somewhere that had a bigger offer, so I thought, let’s do a bigger offer.” Jones’s approach reflects luxury’s tectonic shift from the precious to the functional – one he has led as he has moved through posts at Topman, Mulberry, Dunhill and Louis Vuitton before joining Dior Men in 2018. As a youngster, the British designer saw himself as a hardcore devotee of the punk subculture known as “straight edge” (they refrain from using alcohol or recreational drugs). 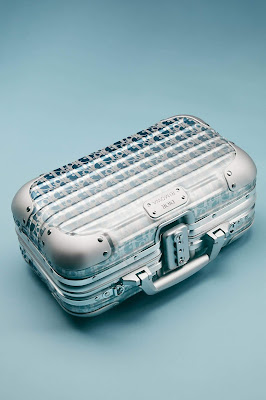 Jones has an extensive personal collection of streetwear and sneakers that he draws on for inspiration, and shares for similar purposes with designer friends such as Virgil Abloh. He has twice won Menswear Designer of the Year at the Fashion Awards and dressed the K-pop band BTS in Dior for its world tour earlier this year. Rimowa has been on a collaboration tear since the now 27-year-old Arnault convinced LVMH leadership – including his father, LVMH chairman Bernard Arnault – to buy an 80 per cent stake in Rimowa for €640 million in 2016. The luggage-maker was established in 1898 in Cologne, where it is still headquartered, and is known for its sleek metal roller cases. Since Arnault stepped in, those cases have become canvasses for artistic and designer collaborations that have been eagerly covered by streetwear sites like Hypebeast. Past collaborators include Los Angeles artist Alex Israel, Virgil Abloh’s Off-White and Supreme.

Arnault has severely cut back on Rimowa’s once-broad distribution, narrowing it largely to its own retail or speciality shops, as he works to gradually turn the brand into a broader luxury lifestyle player. “We view our products as blank surfaces,” Arnault told me when rolling out the Alex Israel collaboration in February. He added that he has been a fan of the brand since he was a teenager and discovered it while shopping at Bon Marché with his mother, the concert pianist Hélène Mercier-Arnault. “When you’re a young kid and you fly commercial, you can’t use a Vuitton suitcase because it gets stolen,” Arnault explained.

The depth of Dior Men’s commitment to the collaboration and the resulting designs stem from Jones’s interest in travelling minimally. He says he loves to travel but hates airports, and that even on long trips, he carries all of his luggage on board and does laundry along the way. Jones made a hurried trip to Rimowa’s German factory to understand the company’s industrial manufacturing process a few months after his initial conversation with Arnault. He was surprised by the speed with which the luggage could be made: less than a year from start to finish, despite the challenges of creating two new shapes (for the Champagne pieces and the small clutch), finishes and leather linings. Luxury ready-to-wear generally takes a year or more from conception to store shelves.

“I like the fact that they don’t say no,” Jones says of the Rimowa factory workers’ response to his demands. “I don’t believe in ‘no, impossible’. I believe in ‘let’s try’.” Things were temporarily slowed by his desire to line the luggage in leather – something Rimowa doesn’t do. It required turning to Dior’s leather atelier, which had to consider what happens inside a suitcase, such as cosmetic spills. As they worked, Arnault sent Jones videos charting the progress of various parts, including the embossing of the Dior logo on metal. Dior’s handbag team oversaw the work, spending more time at the Rimowa factory than Jones could, to his disappointment.

He says he hopes to spend more time at the factory if the collaboration continues as he hopes. In fact, he says he found the industrial process inspiring – hinting at new future concepts. Jones concedes that he is “obsessed” with a small leather-lined, clutch-style suitcase he designed with a leather strap embossed with “Christian Dior” in block letters. The look is both luxe and street. Jones says he imagines taking the piece on board a flight with his headphones and phone inside. “I did things to please myself,” he says of the collaboration. “I’m going to text Alex now,” he says as he travels to an appointment through London traffic. He chuckles. “I think I deserve one. I think I did a good job.”
Posted by FASHIONmode News at 11:35 AM