Rihanna’s Savage X Fenty autumn/winter 2019 collection hit SavageX.co.uk straight after the New York Fashion Week runway spectacular. The queen of production already has another underwear set to promote – this time in support of the Clara Lionel Foundation (CLF), the charity she founded in honour of her grandparents Clara and Lionel Braithwaite, in 2012. The limited-edition Savage X Thrivers Xtra VIP Box supports breast cancer survivors, or “Thrivers”, by raising funds for research and support. 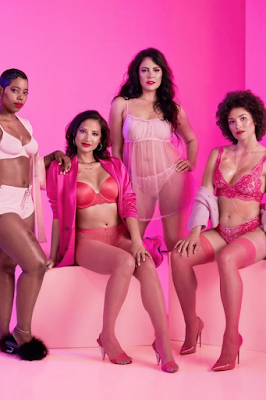 “I want to raise awareness for under-served breast cancer communities and the Savage X Thrivers represent young women of all walks of life living and thriving with cancer,” Rihanna said of the product. “[An easy way] for people to get involved and make a difference is by shopping this box and collection.” Inside each gift box is a scalloped lace bralette and Brazilian knicker set in pink AF, a pair of ultra-soft ribbed knit trousers in cotton candy, and a pack of Savage-themed dominoes. A minimum donation of £3 for each £48 package must be made by customers.

During the month of October, @SavageXFenty will be sharing the stories of “bad-ass women who are making a difference by bravely standing up and speaking out” about their experiences, as per the brand’s notes. In the “Thrivers” launch picture, Stephanie Seban – who was diagnosed with stage four metastatic breast cancer eight years ago at the age of 31 – stands tall alongside Bianca Muniz, who was 11 when she discovered she had ovarian cancer. Muniz was re-diagnosed a second time with breast cancer in her early twenties. Johanna De La Cruz, who was diagnosed with breast cancer after having an ectopic pregnancy at 32, joins them with Nalie Agustin. She was diagnosed at 24, went into remisson and then suffered a reccurence two years later, but is currently living and thriving with stage four metastatic breast cancer. Meet these women at SavageX.com/SXFThrivers

Posted by FASHIONmode News at 6:05 PM