Hailey Bieber and Miley Cyrus’s weddings might have been worlds apart – the former’s a weekend-long celebrity-packed extravaganza themed around The Notebook, the latter star’s an intimate family affair that saw the marriage end nine months later – but the two brides chose the same British fashion house to design dresses for their celebrations. Vivienne Westwood created two made-to-order Cocotte confections within its London atelier for two of America’s biggest celebrities – with a combined Instagram following of 120 million – in the space of months.

The appeal of Vivienne Westwood’s bridal collection is clear: from the perfect corsetry, to the historic references that always feel contemporary. The neckline and body of the Cocotte style is “inspired by the fashionable high society women of the 18th Century, and the fabric which sweeps across the shoulders, drapes and falls from the hip, is reminiscent of ancient Greek statues,” says the brand. Cyrus wed Liam Hemsworth in her Tennessee home in December wearing a floor-length silk satin iteration of the Cocotte. Bieber, meanwhile, opted for a shorter, cocktail version – the Cora Cocotte – in peace silk for her rehearsal dinner at the South Carolina resort that the Biebers took over for their October celebrations. 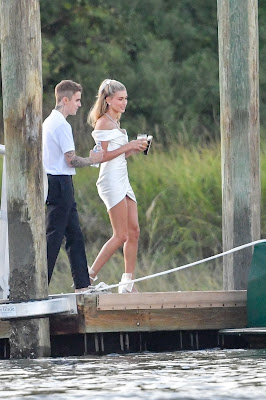 Bieber chose the environmentally conscious fabric option – a cruelty-free silk which allows the silk butterfly to live beyond the cocoon – perhaps because the minidress was the first of three bridal looks she wore throughout the weekend. The Cocotte style also comes in a silk cady and seasonal fabrications, such as spring/summer 2020’s rose prints, as well as the silk satin version selected by Cyrus.

While Vivienne Westwood has always been worn by people of all ages, all genders and all sorts of dispositions, it was interesting that the designer and her partner Andreas Kronthaler chose another Gen-Z star, Bella Hadid, to model the bridalwear in the most recent runway collection. The voluminous creation was inspired by a “naked 1950s pin-up, photographed from below, looking like she’s in the sky with puffs of cotton wool thrown onto her,” as per the show notes. In practice, the warped proportions of the cloud dress looked other-worldly and a touch regal.

Watching these young women walk down the aisle – or the catwalk – in Vivienne Westwood chimes with the image of the designer as a mother figure: a grand matriarch of fashion, who is not only on a tireless quest to save the industry from itself, but one who has been honing her craft and its message for nearly five decades. Authenticity has always been at the heart of the house – and what more could you ask for as a bride?

Posted by FASHIONmode News at 8:32 AM