George Vuitton, the son of Louis Vuitton, selected London for the house’s first store outside of Paris in 1885. The doors to 149 New Bond Street opened in 1900, and the brand subsequently relocated across the road to 17-20 in 2010. After being closed for 14 months for renovations – the sculptural brown logo-ed exterior gave few clues away – the store has reopened with new, colour-saturated interiors masterminded by New York-based architect Peter Marino.

Naturally, fashion’s great and good got a preview of the 17,500- square foot experiential retail space. After exploring the trippy environment housing 43 works of art by 25 artists – nine of which were specially-commissioned – the drinks reception spilled out of numbers 17-20 and on to Annabel’s on Berkeley Square, which also embraced the LV symbol as part of its decor for the night. 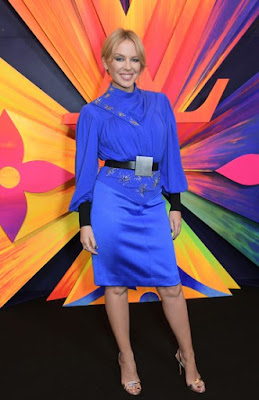 Alexa Chung, Poppy Delevingne, Amber and Yasmin Le Bon, and Naomi Scott provided the Brit girl energy, while Gal Gadot, Shailene Woodley and Jason Momoa brought a dash of Hollywood glamour to the Mayfair proceedings. Doutzen Kroes, who is in town for the One Young World summit, stopped by to see Mark Ronson spin the decks, while Noel Gallagher and Kylie Minogue also watched on. Maisie Williams was glued to her partner Reuben Selby as per.

Nicolas Ghesquière’s usual power posse of brand ambassadors, including Alicia Vikander, Michelle Williams, Jennifer Connelly and Sophie Turner, was absent, but the extended guest list proved the enduring pull of the house. London has been home from home to Louis Vuitton for 134 years, but last night was the start of a bright new chapter.
Posted by FASHIONmode News at 11:13 AM