Kim Jones has charted his first year as artistic director of Dior men’s through over 100 black-and-white photographs of his friends and colleagues taken by Nikolai Von Bismarck. “I wanted to create a document, in a timeless way,” Jones tells Vogue of The Dior Sessions, which is published by Rizzoli. When it came to selecting the photographer, it was simple: “I love Nikolai’s work and it suited what I wanted to do – so I said let’s make a book together.”

Shot on film over the course of nine months and across three continents, the diverse cross-section of sitters features Von Bismarck’s partner – and close friend of Jones – Kate Moss, and her daughter Lila Grace Moss Hack, A$AP Rocky, Robert Pattinson, David Beckham, Demi Moore, Eddie Redmayne, Takashi Murakami and Jude Law. “Lee ‘Scratch’ Perry was one of my favourites. He was extra-terrestrial!” says Von Bismarck. “The most intimidating were definitely the photographers. David Bailey tested me with hundreds of questions… ‘What camera is that? What lens is that? What song is this? What lights are those?’ On and on he went. The only question I didn’t have an answer for was when he pointed out of the studio window and asked, ‘What tree is that?’” 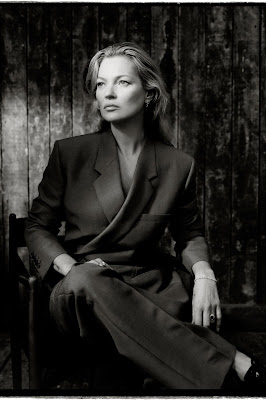 The genesis of the project – which saw Von Bismarck rummage through prop houses and flea markets for set ideas, as well as the Dior ateliers for his subjects’ looks – was actually a conversation he had with Sir Donald McCullin two years ago. After showing the renowned British photojournalist his reportage work from Ethiopia, Myanmar and Mozambique, Von Bismarck outlined his next trip to Nigeria. “Don suggested staying in London for a year and embarking on a portraiture project,” recalls Von Bismarck. “He said being in one place would teach me discipline and patience – it most certainly did! I thought to myself: ‘Here is this man in his eighties still going to Syria and Papua New Guinea, what is one year out of my life to follow this master’s advice?’” Shortly after this encounter, Von Bismarck went for a long walk with Jones, who had just taken the helm at Dior. “He suggested we collaborate on a book, and how could I say no?”

The complex scheduling that followed was intense. “We were referencing, researching, shooting, developing the film, contacting, editing, printing and archiving,” explains Von Bismarck, who worked 16- to 18- hour days on the book, choosing layouts, font and cover options for weeks on end. “I’d have to say Tokyo was probably the most extreme [of the shoots],” he shares. “We photographed 12 people in two days and flew straight back to London. It was also my favourite.”

A portion of the sales from the £102 book – the first of its kind dedicated to Dior menswear – will benefit the Teenage Cancer Trust. As Jones continues his tenure at the French legacy house, and Von Bismarck has learned the creative benefits of staying in one place, you get the sense this may not be the last project they embark upon together. “Kim’s fascination with the history and the archive of Christian Dior, as well as his use of the couturier [captivates me],” surmises Von Bismarck. “The tailoring is exceptional and has been an honour to photograph.”
Posted by FASHIONmode News at 5:43 PM