From Jennifer Aniston to Princess Beatrice, The Vampire’s Wife has amassed a celebrity following too long to list in full. For Susie Cave’s latest line of perfectly formed, polite-yet-overtly feminine dresses, she has called upon fans and friends of the brand to model the pieces in a dreamy, lo-fi campaign captured by photographer Casper Sejersen. Kate Moss, Keira Knightley, Mary McCartney, Bella Freud, Philip Treacy and Greta Bellamacina, to name a few, wear the “Pussy Bow” collection alongside the designer and her husband, Nick Cave.

The project is the first in a series of collaborations with costume designer Alice Babidge, whom Cave met through her son Earl when they worked together on western film True History of the Kelly Gang. Each design, from the popular Falconetti to its sisters, the Festival, the Belle and the Cinderella, features a bow stitched into the sumptuous fabric, whether small and hidden or opulent and overt. 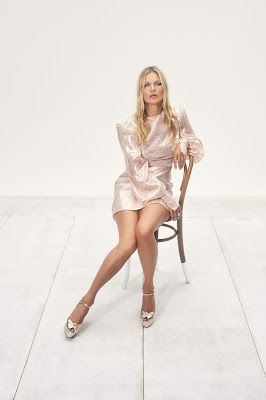 The famous faces all chose what they wanted to wear from the softly coloured, metallic-tinted edit, which features lace and florals in abundance, including Simon B Mørch in the Early dress and Paul-Anthony Smith in the Kaftan. “It was Alice’s idea to ask friends who’ve been very supportive of me as a person and the brand to be in the campaign,” Cave tells Vogue. “I was too shy to ever ask Keira Knightley, Kate Moss – or anyone – to do [that]; I didn’t want to put them on the spot. But they very kindly agreed to be in the photographs.”

The next capsule will be entitled “Frill Seeker”, and will no doubt play on the ruffle trimming on Cave’s romantic dresses. Whether or not the collaborators will enlist more of their creative community for an accompanying picture series remains to be seen. “[Many of people attracted to the brand are] other musicians and actors and people who are in a similar world to Nick,” says Cave. “[They] gravitate towards us fortunately.”

Posted by FASHIONmode News at 11:17 AM