Off-White Is The Most Popular Brand In The World Again

Earlier this year, Virgil Abloh announced that he would be “shifting gears” and slowing down due to health concerns. He sat out Off-White’s spring/summer 2020 show, residing in Chicago rather than Paris, but his presence was still felt through the streetwear and millennial evening wear presented on the runway and via social media. This connection between Abloh and his cult following pays dividends. As well as the lucrative deal Off-White’s licensee, New Guards, signed with Farfetch, statistics from the third financial quarter show that Off-White is once again the most-popular brand in the world.

The latest edition of the Lyst Index – the quarterly report that analyses the online shopping behaviour of more than nine million shoppers a month searching, browsing and buying fashion across 12,000 designers and e-stores – ranks Off-White at the top of the leaderboard once again. Gucci, which took the top spot in Q2, has dropped two positions to rank third, while Balenciaga comes in second. Versace and Prada round out the top five positions respectively.

Bottega Veneta entered Lyst’s brand billing for the first time thanks to the impact creative director Daniel Lee has made at the Italian house. Searches for Bottega Veneta shoes were up 156 per cent during the spring/summer 2020 shows owing to the popularity of the brand’s cushioned sandals, which sparked more than 27,000 online searches a month last quarter.

Also climbing up the ranks is Jacquemus, which is yet to enter the top 20, but whose Le Chiquito is number two on the hottest product list (after Bottega Veneta’s padded shoes). The micro handbag, which counts the Kardashian-Jenner family as fans, generated over 12,500 monthly searches during the last quarter. Global demand for Jacquemus is currently up 131 per cent year-on-year. 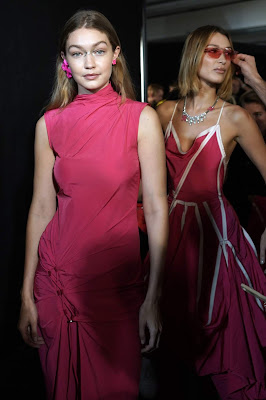 Paco Rabanne is on the ascent owing to the popularity of its influencer-approved 1969 bag, as seen on Priyanka Chopra and Emily Ratajkowski. The accessory is 10th on the women’s product list – the first time Paco Rabanne has landed on there – and global searches for the brand are currently up 31 per cent year-on-year.

Balenciaga and Gucci have consistently ranked in the top three brands since the Lyst Index launched two years ago, and fewer than two new labels have joined the list each quarter. The attributes of the most popular brands – 80 per cent of labels from the first edition are still in the report – are clear. The overall product split is 60 per cent womenswear to 40 per cent menswear, and there is a star designer spearheading the collections. On average, the most-popular brands’ creative directors have two million social-media followers, and the designers are also tuned into the importance of social media and harnessing the pulling power of influencers. Viral celebrity moments, such as Jennifer Lopez rewearing her iconic Grammys 2000 dress at the Versace spring/summer 2020 show, can spike social mentions by more than 1000 per cent within hours.

On the product front, trainers make up 14 per cent of the labels’ overall product range, while the other cult products sit in an accessible price bracket of £155-£390. More than half of the merchandise that has ever appeared in the Lyst Index has featured a prominent logo.

Interestingly, 50 per cent of the listed brands are making moves towards a sustainable future by signing the G7 Fashion Pact. Forty per cent have also committed to going carbon neutral. Whether having an environmental conscience relates to consumer loyalty is yet to be seen in the report, but the pressure for brands to be accountable for their actions while creating era-defining fashion is certainly mounting.
Posted by FASHIONmode News at 11:26 AM