Saint Laurent Has Launched A Range Of Condoms

This is not the first time a fashion house has created branded condoms. In 2018, Alexander Wang worked alongside the Trojan brand to promote "safe sex" using the hashtag #ProtectYourWang. More recently, Vetements competed in creativity, by creating invites to its Spring/Summer 2020 show in the form of fuchsia pink and black condoms. 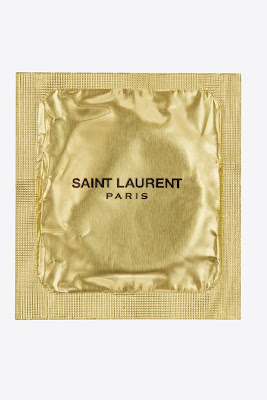 It was on Instagram that Anthony Vaccarello, creative director of Saint Laurent, announced the launch of a range of logotyped condoms via a shot of his new campaign "The Love Affair", in which supermodel David Alexander Flinn, with his tattoo-covered body, dressed as Adam, standing in front of Anja Rubik. For the price of two euros each, the condoms are available in a variation of the house's signature designs (zebra, heart or gold versions), exclusively at the Saint Laurent Rive Droite boutique. Head for 213 rue Saint-Honoré in the first arrondissement of Paris to get your hands on this real object of desire.

Posted by FASHIONmode News at 7:45 PM