The Fashion World Has Fallen For This Bottega Veneta Model

First to tread Bottega Veneta’s Instagrammable quilted runway in Palazzo Senato was Barbara Valente. The Brazilian model set the tone for a collection that Daniel Lee described as “solidifying the icons”, wearing a one-shoulder black dress with a blown-up intrecciato bag slung across her body, and woven square sandals that matched many of the editors’ feet lining the front row.

If the athletic Salvador-born beauty looks familiar, it’s because Ashley Brokaw, the casting director behind Prada’s influential model line-up, signed her in 2015 as a spring/summer 2016 runway exclusive. Afterwards, Valente moved back home to raise enough money to build a base in New York, where she has now lived for two years. Walking Lee’s second show for Bottega Veneta – aka the most anticipated show of Milan Fashion Week – signifies the beginning of her comeback. Put Barbara Valente on your radar right now.

“I’m a beach girl from the northeast of Brazil, but Brazilians are never just Brazilians,” she tells Vogue. “We have a lot of cultural richness in our country. My parents are both Brazilians, but I have African and Spanish blood in me that dates back to generations before my great grandmother.” When Valente finished school, she applied to be a model for Canvas Management Brazil and came second in the competition. The agency still represents her, along with Select. 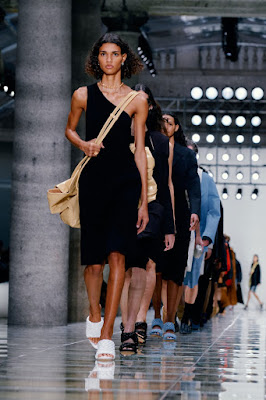 Since her last major runway turn four years ago, Valente has noticed an openness pervade the industry. “It’s more inclusive, real people are now profiled,” she shares. “I see designers bringing street style to the runway and that’s incredible. To me, it all starts there.”

Although Valente was booked as a Bottega Veneta exclusive, she didn’t just fly in and out of Milan for the show. “I spent the last week working on the build-up of the looks, and was able to follow Daniel’s creative process,” she says. “Witnessing the details and dedication left me really excited to walk the runway. It was an incredible moment.”

Was the model as enamoured with look one – note the chunky necklace, which symbolised Lee’s new heavy metal jewellery diktat, according to Vogue’s Ellie Pithers – as the rest of us? “I identify a lot with the brand, and it was an honour to be the woman that opened such a minimalist yet chic and modern show.” Affirmative: Valente has a case of Bottega fever, too.

Posted by FASHIONmode News at 8:31 AM