One of the most interesting aspects of the past month of shows has been poking one’s head out of the fashion week porthole. Outside in the real world, climate marches and environmentalism have filled the news, confirming the zeitgeist that’s impacted the clothes on these runways. Sustainable fashion is an oxymoron – we understand this – but at Paris Fashion Week, designers haven’t just been reflecting the moderation mentality on a practical level. It’s permeated from their designs, too. After seasons of opulence (now known as The Valentino Effect), our collective climate shock seems to be presaging a new restraint in our future wardrobes, and indeed, looks. In fashion as in its surrounding world, the climate alerts are a rude awakening that doesn’t come without withdrawal symptoms. It was clear on the Paris runways where the new appetite for purity and clarification still bore remnants of opulence.

At Miu Miu, Miuccia Prada illustrated that tension so vividly in a collection that literally pinned surface decoration to the silhouettes as if they were paper dolls. “Simple done with little,” she said, reflecting that it was about “suggesting a way of dressing but leaving people free to do their own thing." It manifested in 1940´s patent leather coats delicately painted with flowers, or in the neatness of a cream patent leather perfecto worn with a peplumed turquoise leather skirt and a mustard kitten heel. The effect was sumptuous but the message was – not unlike the Prada collection two weeks ago in Milan – one of simplification. An even louder example of the same contrast became evident at Dries Van Noten, who staged a surprise one-off duet with the legendary Christian Lacroix. 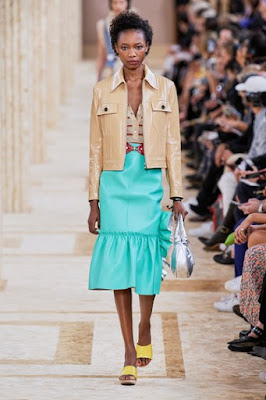 Their meeting of minds manifested in a collection that fused Lacroix’s grand couture gestures with Van Noten’s pointed sense of modernity, constantly retaining a balance between magnificence and moderation. “It’s maximalism for every day,” Lacroix reflected. “I became a couturier because I couldn’t be a costume designer for the stage. When I was mixing in contemporary things it was with a very loud touch, not a subtle tank top with a little bit of transparency and just one feather,” he recalled, comparing his legacy to the moderate opulence that shaped a collection ultimately rooted in haute couture. Those two words were on everyone lips after an Alexander McQueen show which left no one doubting Sarah Burton’s preference for savoir-faire. 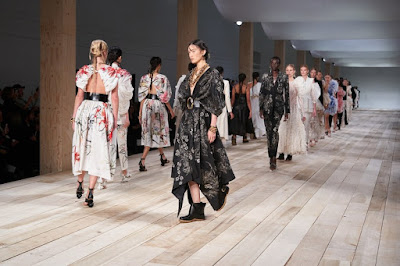 Through her inimitable vision – that pagan, shipwrecked, armoured Industrial Revolution that fills her dreams – Burton composed what was likely her most artisanal collection to date. “It was about time and the slowing down of time,” she said, “... a calm time to think our own thoughts and how we felt about things.” In all its handcrafted glory, Burton’s collection expressed a purity in whites, calico and toile fabrics that outlined that tension between restraint and the lavish nature of haute couture-level garments. At Noir, Kei Ninomiya became Saturday’s Instagram sensation with a collection that hit those same artisanal notes, veiling models in bouncy clouds of flower embellishment or multi-layered strips that looked like foliage.

Clare Waight Keller reflected fashion’s excess withdrawal symptoms in a collection based on the contrasts between early 1990´s New York and Paris in her Givenchy collection. “Back then, there were very distinct moments happening in different cities,” she recalled. “New York had this very raw spirit: a lot of denim, a lot of ease, minimalism, and the idea of being very characterful. Whenever I would travel to Paris, it was opulence and florals and couture house extravagance.” Lined up on a rail, her garments would look like they belonged to entirely different worlds, sleek leather top and skirts versus monastic mega volumes daubed in florals. 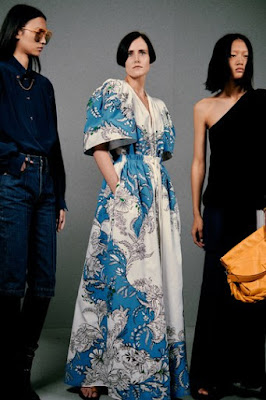 The Comme des Garçons collection also staged a meeting between minimalism and maximalism, but here through the narrative of Orlando – “liberation through time,” as Rei Kawakubo said – the sentiment expressed itself rather differently. From the court dress of the Elizabethan and Baroque eras through the Romanticism of the nineteenth century and the modern breakthrough that followed, Kawakubo blasted her audience with opulence only to gradually bleed out her saturation until she had reduced it to black silhouettes on her runway. It’s a cycle of decadence of a time so overindulgent the glass eventually has to spill over and strip down to its core. If the process that unfolded on her podium was Kawakubo’s proposal of a new appetite for minimalism, she presented us with a revealing mirror of our own insatiable desire for excess. 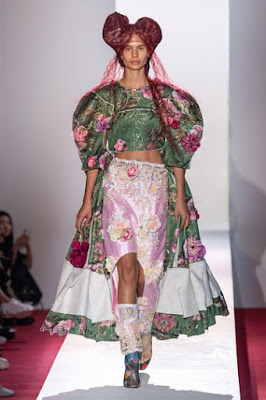 Decadence is a theme John Galliano has been exploring at Maison Margiela since his haute couture collection in January, examining “if inverted excess could lead to a new appetite for restraint". This season, his idea of moderation was expressed in a make-do and mend sensibility that evoked the uniforms and everyday upcycling of the world wars. Galliano’s sentiment was “remembrance, liberation and hope”: a call for young generations to look to the past in order to change the future. “Wisdom gained from the past gradually gets buried in the news. Stories of hope, heroines and liberation are forgotten as history draws ever closer to repetition,” he reflected. As he elaborated on his podcast, Galliano was referring to Brexit and the gradual dissolvement of everything we learned from the wars. 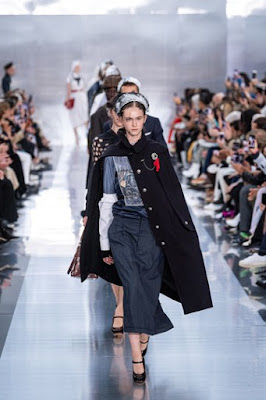 He wanted those new generations to take note, stand up, and fight against the reactionary tendencies of today. In an all-EU blue Balenciaga set created to evoke the European Parliament, Demna Gvasalia’s message felt a lot less hopeful. Exercised in his oft-used executive realness silhouettes condensed to drab, dark contours, the show was an unnerving experience, fuelled by the unceasing repetition of broad-shouldered frames, ever-expanding oversized forms, and Balenciaga’s seasonal subverted wardrobe staples. If it was a reflection of these sad Brexit times, there wasn’t much hope to come for here. At Louis Vuitton, the case was entirely different. On the cusp of a new decade, Nicolas Ghesquière heralded “a new Belle Époque” in an effervescent Louis Vuitton collection, which modernised elements of that era in some of the most joyous – and often maddest – garments of his career. 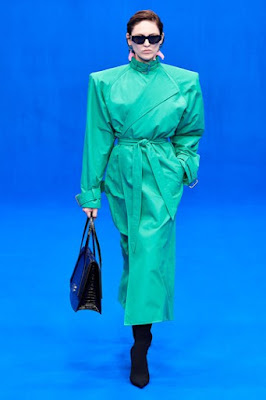 Between his kicky hemlines and puff shoulders, ballooning sleeves and millefeuille cuffs, and the vibrant abstract prints that covered what seemed like every garment – no two the same – Ghesquière foreshadowed a decade he obviously predicts will be the age of hyper-individuality and diversity. In the Louis Vuitton medley of multiformity and Belle Époque references there was a message for the future to look to the past. Above all, Ghesquière is driven by unexplored territory but like Galliano, he understands that there’s no tomorrow without learning from history. It was a good philosophy to see us into the 2020´s. 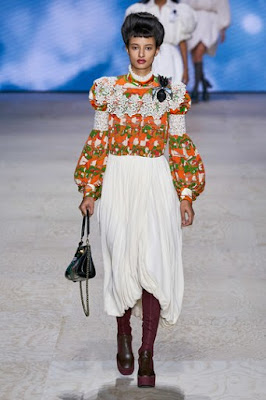 If the new decade will be one of sustainability and moderation, the most Parisian houses of them all have already jumped on the buy-less wagon of wardrobe staples. At Celine, Hedi Slimane confirmed the woman he debuted on that jaw-dropping evening in February, and spruced up her old culottes. She travelled from Saint Germain to Saint Tropez circa late 1970´s, merging her bourgeois Left Bank blouses, patchworked denim skirts and racehorse tailoring with broderies and fineries from the south of France. In his own conversation between excess and restraint – showpiece and wardrobe staple, you might say – Slimane increased the volume on his demi-couture in dazzling encrusted evening jackets, bejewelled nightclub dresses, and intricate lamé numbers that felt like an explosion of joy; a feeling close to hope. 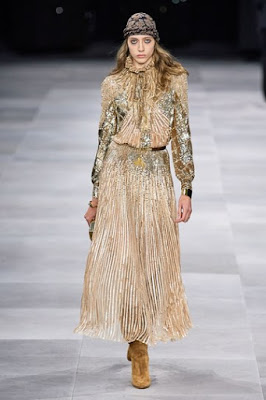 The 1970´s reverberated through the fashion capitals this season, and the houses closest to the decade rolled out their expertise. At Saint Laurent, Anthony Vaccarello honoured Yves Saint Laurent’s legacy via the Russian collection from 1976 and the master’s sailor influences from the early 1960´s. But this didn’t feel like a themed affair. Vaccarello’s largely black collection was an exercise in wardrobe essentials the Saint Laurent way. Bar the mini shorts, most of his black pieces had a trendless quality to them that went hand-in-hand with our appetite for moderation. Virginie Viard’s 1970´s message at Chanel was upbeat and youth-aspiring: skimpy bouclé all-in-ones and mini dresses, jaunty petticoated skirts, Capri jeans and a pair of pink lamé hotpants worn with a fringed plume top. 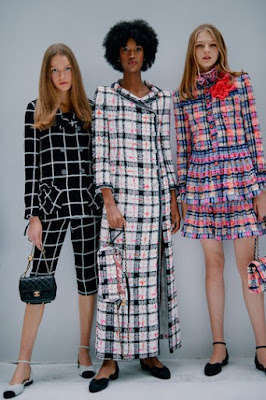 Whether Viard’s pieces classified as timeless wardrobe staples is in the eye of the beholder, but the spirit of moderation was definitely felt in Paris. “We have to educate ourselves,” Maria Grazia Chiuri said. “I don’t know if we can arrive at a point where we can say we are sustainable. But I think we can do our best to impact less.” Her Christian Dior show paid homage to gardening as a message of nurturing the planet. She expressed it in organic materials such as highly decorated raffia on dresses and cutesy burlap suits with foliage embroidery or garden grid motifs. “We have to be transparent with our audience. Fashion can do a lot because in its power to affect the choices of its audiences.” 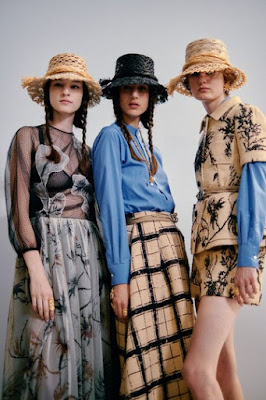 For an overproducing industry, the most obvious choice is to make people buy less. For years, Vivienne Westwood has sported a T-shirt with those two words on it. “She’s right. Simple and effective. She speaks the truth,” Chiuri said. “Buy less!” Every fabric used in the Andreas Kronthaler for Vivienne Westwood collection was taken from studio deadstock, a creative challenge that obviously fuelled a divergence between every look. Increasing his environmental consciousness, Kronthaler had refrained from dying materials like he did last season, instead altering fabrics through washes or other less polluting treatments. “I’ve been very, very careful being as sustainable as I could, and I’m very conscious and serious about it, but I don’t want to use it as a headline,” he said. 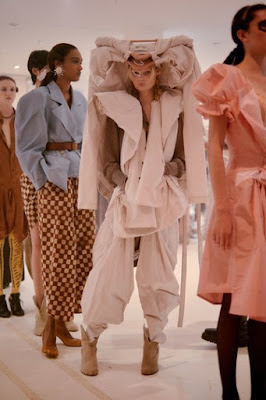 “Be careful with what you buy and love the things you buy. Even the most basic T-shirt. The cheapest things are the worst polluters,” Kronthaler warned. “God knows we have to take it seriously what’s going on. I’m not even sure fashion weeks are feasible anymore.” As a new member of the LVMH roster and sustainability adviser to the company, Stella McCartney is constantly thinking those thoughts. “We’ve been woken up,” she said. “Now is the time to give people information, to give them a solution. Things need to change immediately, but can they? If you scare people, you have nowhere to start. We have to make people feel like they can do little things. You shouldn’t have to sacrifice style or your quality of life. I hope when you see that fashion show, you don’t see in any way that it’s sustainable. It’s about being desirable and beautiful and luxurious, and yet it’s got those ingredients. We have to get to that place.”

Posted by FASHIONmode News at 8:02 AM