Lupita Nyong’o has joined Michael Kors’s global philanthropic campaign against hunger. Now in its seventh year, Watch Hunger Stop collaborates with the United Nations World Food Programme (WFP) and its school meals initiative, which levels the playing field for underprivileged students. “Hunger is a defining issue for our world and climate change is worsening the problem,” Nyong’o tells Vogue. “We must work to change this dynamic. My hope is that by adding my voice to the fight, I will help be a part of the solution and encourage others to take action as well.”

The theme of this year’s campaign is “Food is Love”. To help feed a child is to care for them and support them as they make their way in the world, Kors believes. Since its inception, the Watch Hunger Stop campaign has helped WFP deliver more than 18 million meals to children. “School meals are a smart way to fight hunger because they link education to nutrition,” explains Nyong’o. “Children get multiple benefits, as do their families with each school meal saving them money.”

To mark World Food Day on 16 October, Michael Kors has created a T-shirt (£33) and a tote bag (£48) featuring the word “Love”. One hundred per cent of the profits will be donated to the WFP, and Kors will pledge 100 additional meals for every picture shared online by a customer using the hashtag #watchhungerstop. Shoppers in select Michael Kors stores around the globe can also make a donation directly to WFP – just £4 feeds a child in school for a month. “Fashion connects people, it engages and inspires them, which makes it a perfect space for philanthropy,” says Nyong’o of why it was a no-brainer for her to sign up. “For many people, myself included, fashion is about self-expression, and the issues we care about are very much a part of how we define and express ourselves.” 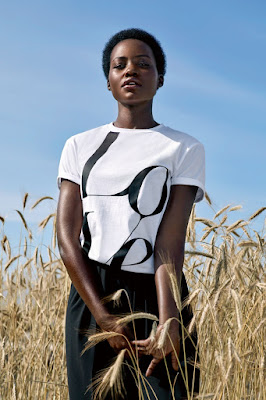 Nyong’o says her mother taught her that philanthropy is a human responsibility from a young age. “She is selfless to a fault, passionate and dedicated to the causes she takes on and patient beyond comprehension,” smiles Nyong’o. “She acts, not for the public glory but for the private satisfaction that giving back gives her.” The Oscar-winning actor has penned a children’s book, entitled Sulwe, in order to pass on a little of this kindness, and “to instil the notion of self-worth when children are still formulating their identities”.

The Black Panther star has long used her platform to raise awareness for human rights and gender equality, but Nyong’o often feels overwhelmed by the destruction and evil in the world. “In those times, I suffer a quiet panic,” she shares. “But then I remind myself of [the French director] Robert Bresson’s words: ‘Make visible what, without you, might perhaps never have been seen,’ and that renews my faith in myself and in my ability to effect change in the world. Just because we cannot fully fix some of the larger issues facing our world today does not mean we cannot make small differences that add up.”

Her advice for anyone striving to take an active stance on an issue is: “For there to be a chorus, each person must sing,” she says. “That’s a fancy way of saying that it takes the action of one to start a movement; every action counts!” If Watch Hunger Stop is able to provide a school meal for one child, that is a positive change that Nyong’o is proud to be a part of.