The Fashion Awards 2019 Nominations Are In

The nominees for the Fashion Awards 2019 have been revealed ahead of the 2 December ceremony at London’s Royal Albert Hall. “Each and every one of them is being recognised for their creative excellence and innovation,” commented Stephanie Phair, British Fashion Council Chair.

Among the household-name brands that make regular appearances in the 10 categories, such as Gucci and Prada, there’s a new frontrunner: Bottega Veneta, which is nominated for Brand of the Year. Creative director Daniel Lee is up for Accessories Designer of the Year – no doubt in part down to his cloud-like The Pouch, which sparked waiting lists worldwide (Rihanna has it in three colourways) – and Womenswear Designer of the Year. In the Model of the Year category, Adesuwa Aighewi joins previous nominees Adut Akech, Adwoa Aboah, Kaia Gerber and Winnie Harlow, in what is the most diverse line-up to date. Additionally, Fenty is listed in the Urban Luxe category – the first time Rihanna has received a nod for her solo fashion endeavours and not off the back of a collaboration with Puma.

Earlier this year, the BFC announced that it would recognise Naomi Campbell’s outstanding contribution to the industry by crowning her its 2019 Fashion Icon. Giorgio Armani will also be honoured with the Outstanding Achievement Award, and more special recognition accolades will be announced prior to the event. The industry will also celebrate 100 young creatives, from photographers to stylists, set designers and make-up artists, as part of the New Wave: Creatives scheme, which the BFC launched last year.

See the full list of Fashion Awards 2019 nominees below, which was decided upon by the global voting panel of 2,500 members of the industry. 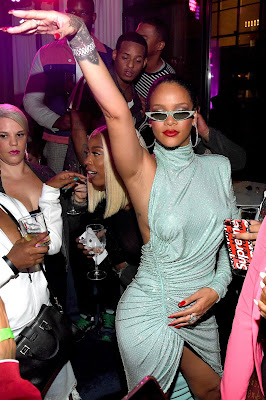 Brand of the Year

British Designer of the Year Menswear

British Designer of the Year Womenswear

Posted by FASHIONmode News at 12:02 PM