Cindy Crawford: The Supermodels & I Were Like A ’90s Boy Band

Cindy Crawford starts every day with a jacuzzi. Ten minutes of self-reflection in her whirlpool bath are followed by a green tea. By 8am, she’s in the gym. At 10am, the model is on the phone in her Malibu home making calls and navigating the various avenues of Cindy Crawford, the business. The latest strand of which has brought her to London – not for the shows, but a dinner with the partners of Silestone by Cosentino, the leader in quartz countertops, which Crawford has been the face of for three years. The “Tops on Tops” campaign celebrates two top players in their respective fields.

Crawford made the decision early on to use modelling as a springboard to build a name for herself outside of fashion and to pursue her own projects. “Now everyone is doing collaborations and starting their own lines, but, back in the ’80s, there was no one for me to follow,” Crawford tells Vogue, during a conversation that neatly loop her interests in fashion and interiors together. “Models used to be replaced every five years, so I assumed that at 25 I would have to go back to school. Here I am at 53! I’m representing different brands, which is appropriate, but every time I get my picture taken, to me, that’s modelling.”

The first “baby step” into business came early on when Crawford didn’t “jive with” the Sports Illustrated producers. She shot her own calendar and gave a portion of the proceeds to charity. An exercise video followed for the generation who didn’t have a Jane Fonda figure in their lives – “I’ve never been the model who can just eat French fries and cheeseburgers” – and she would go on to side step into beauty and furniture lines. “It took me a while to trust my instincts,” she says. “But no one knows more than me about Cindy Crawford. I am the world expert, and so I have the final voice on that in a board meeting.” 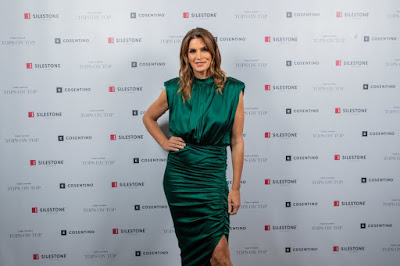 Since her children, Kaia – Vogue’s October cover star – and Presley Gerber have started traversing their own successful modelling paths, Crawford has been thrust back into the industry. “I feel I’m most known for giving birth to Kaia now,” she laughs, before expanding on how the industry has changed since her own star ascended at her daughter’s age. “I come from a world where you shoot 100 photos and pick the very best one to show to everyone,” Crawford explains. “Now images are put out more quickly, they are not as curated. I think that’s interesting, but I’m still trying to figure out how I want it to work for my brand.” Social media, she admits, has both scared and inspired her.

Just as Instagram has launched the careers of the Gen Z catwalk stars, who are the colleagues of her own brood, Crawford believes that cable television helped raise her own visibility in the late ’80s and early ’90s. “Before Christy, Linda, Naomi, Claudia, Kate and I, models weren’t well known,” she begins reminiscing about the heyday of the supers. “It was almost like we were a new boy band – we were all different, but we looked good together.”

“Fashion was all about glamazonian shoulder pads, high heels and strong women,” she continues. “We didn’t look like victims, we looked empowered. I really think that we felt that way, too.” It’s not the catwalks Crawford misses the most about that time – she admits she has never loved walking runways – but being backstage. “It was like a slumber party,” she smiles. “We were all tired and a little bit punchy, but real friendships were formed.” Decades on, it’s the work ethic and care that she has passed on to the models who have succeeded her, including Kaia.

Posted by FASHIONmode News at 8:21 AM