What fashion dreams are made of: Dries Van Noten has collaborated with Christian Lacroix on his spring/summer 2020 collection. Eagle-eyed editors first took note of the Belgian designer’s show invitation: block lettering scrawled across a plain white card. Handwriting similar to the legendary couturier’s presented a major clue.

As Paris Fashion Week attendees took their seats they found a single red rose waiting for them, a hint at what a partnership between Van Noten and master of 1980s drama Lacroix – whose own house closed in 2009 – might bring. And then came the colour, ornate embellishment and volume that Lacroix built his name on – the trademarks he subsequently transferred to stage costumes after side-stepping from the industry. From the bold fuchsia and orange palette to the feathers, leopard and zebra print, Lacroix’s extravagant eveningwear was fused with Van Noten’s easy silhouettes for a collection that bore all the tropes of the 1980s, but felt contemporary. 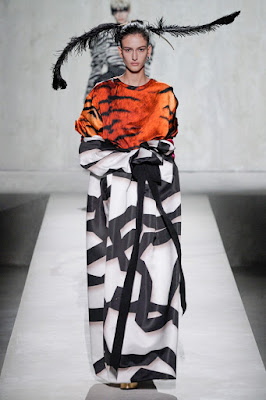 “Today’s world and the political, economical and environmental climate can be divisive exclusionary and drab, meagre in a way,” read a message from Van Noten shared online. “This left me thirsting for all that would be maximalist, optimistic, flamboyant, inclusive and enchantingly extravagant. There is a place for powerful opulence, exaggeration and fun and I need that energy.”

He went on to share that his research into the whimsical Paris couture scene in the 1980s and 1990s – a period that was marked by Lacroix’s artistic vision – was how he formed a personal relationship with the designer. “It became a natural wish that I would love to work with him on this collection,” he continued. “That wish came true.” As the two creatives took a bow next to a model wearing a fabulous confection sprouting luscious cream plumage, there was no doubt they were flying high.

Posted by FASHIONmode News at 8:48 AM