After dipping a toe in the rich waters of the Old Masters, Victoria Beckham’s art obsession has taken her towards the Pop Art movement. From 28th September through to 4th October, 12 works by Warhol will go on display at Beckham’s flagship store on Dover Street in collaboration with Sotheby’s.

Spanning three decades of Warhol’s prolific output from The Factory, the exhibition features two self-portraits – one dating back to 1966 when the artist’s celebrity star was in the ascendant, and the other, taken in 1986, a year before he died. Portraits of Warhol and members of his New York studio captured by Cecil Beaton in 1969 also sit alongside Warhol’s creative manipulations of the Dollar Sign (1981), and “Superstars” Judy Garland and Liza Minnelli (1979).

The exhibition of Warhols, which are available for private purchase through Sotheby’s, is the third partnership between Beckham and the gallery. The entrepreneur always envisioned her Mayfair store to be an evolving creative space and swayed Sotheby’s to trial its first ever retail space exhibitions – first, a show dedicated to powerful portraits in June 2018, and second, celebrating the work of trailblazing female artists from the 16th to the 19th centuries in December of the same year. 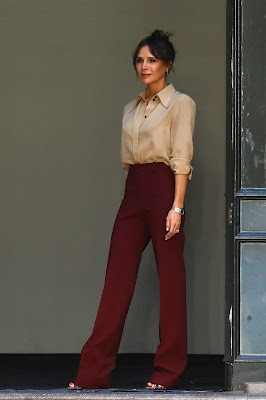 “The relationship I have built with Sotheby’s over the past year has taught me so much, and I feel so lucky that they continue to bring works to showcase in my store,” Beckham told Vogue. “I have always been interested in contemporary art and David and I have been collecting for a long time now – so this exhibition feels extra special. I remain fascinated by the stories the pieces shown in my store tell, and hope others that visit will feel the same.”

Did we mention there’s tequila? Don Julio has created a bespoke bar for Beckham serving its 1942 tequila (Beckham’s favourite party tipple, FYI) for customers to sip while perusing the splashes of primary colour from Warhol, and pops of red, blue and purple from Beckham’s autumn/winter 2019 collection which she described herself as “cinematic”.

Posted by FASHIONmode News at 9:00 AM