Between Titian’s Judith cradling the head of Holofernes on a silver plate and her modern-day doppelgänger Tess McMillan strutting along a pink velvet runway in candyfloss tulle and a matching hoodie, there was only one way to sum up the Giambattista Valli x H&M catwalk show: sensory overload.

“I don’t care about fashion. I don’t care about trends. I just do my own thing,” Valli said, on the occasion of the unveiling of his much-hyped collaborative collection with the Swedish retailer in rainy Rome. “My own thing” translated as hosting 400 giddy guests at the Palazzo Doria Pamphilj, one of the largest palaces in the city still in private hands, with models ambling through stunning Baroque frescoed galleries boasting paintings by Caravaggio, Velázquez, Titian and Raphael in extravagant designs that appeared entirely fitting for the lush location.

Kendall Jenner opened proceedings in a pretty pink mini dress cinched with a bow (surely the collection’s most highly prized piece), then led a finale of models in a floor-sweeping red tulle number. Both designs will be available in limited quantities when the collection goes on sale on 7 November, with Kendall having starred in the campaign and unveiled the news of the collaboration way back in May, at amfAR in Cannes, with a limited drop of more couture-like dresses.

“He’s a master of beauty, he does that timeless couture thing so well,” said Ann-Sofie Johanssen, H&M’s creative advisor, of the decision to partner with the Rome-born designer. It was Valli’s idea to divide the collection into several drops. “He wanted to explain his world, he had an idea that he wanted to show his iconic, timeless pieces. He’s kind of old-fashioned in that sense – he’s a true dressmaker.” That said, woven in with the dresses were bleached denim separates, leather jackets and sequined tuxedos for the boys (there was the full menswear complement here) plus a whole load of embellished sweatshirts and T-shirts. “The price spread is super important,” said Johansson. “Everybody should be able to afford this collection.” 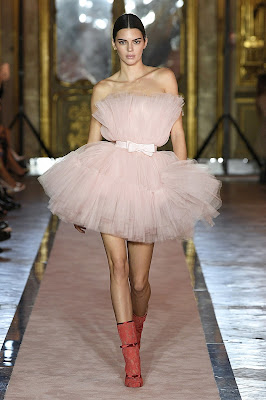 H&M has used designer collaborations as a way to bolster its fashion credentials since it first collaborated with the late Karl Lagerfeld in 2004. While there was no suggestion that it plans to scale back the trappings of that tactic – the Rome catwalk show was followed by a buffet in the Palazzo and a frenzied shopping event, then a glamorous party at the fin-de-siècle-style Grand Hotel Plaza – the future of designer collaborations is on the minds of its creatives.

“The collaborations are really fun to do, sharing knowledge and inspiring each other,” Johansson acknowledged, “but we have so many collaborations now throughout the year, often with local designers, such as Angel Chen in China. It’s a question we have to ask ourselves, does this big one still matter? Sometimes it’s hard to find that one designer that everybody knows in the world – someone like Karl Lagerfeld.”

She also acknowledged that fashion’s biggest challenge was climate change. “Sustainability – we address that very seriously but it’s challenging.” Will it force the retailer to produce fewer clothes? “Maybe. We have to wait and see. Depending on what our customers tell us. From 2030, all our fabrics will be sustainable sources [according to an H&M target]. So many fabrics we can’t work with – leather, denim. So maybe new fabrics will appear. We need to explore new fabrics but can we do them in the volumes we need? And by that, maybe we will do less collections. Our customers, they are telling us that they don’t want to shop like they have done for the last 20, 30 years.”

They’ll want to buy Giamba on 7 November. But the designer believes his designs will endure, which in itself is a riposte to so-called fast fashion. “It’s not my personality to do one thing, then the opposite, trashing the season that came before,” he said. “Telling people that ‘this is out of fashion’ and that they need to buy more – this is not my way. My clothes are about longevity.”
Posted by FASHIONmode News at 11:31 AM