Claridges Commissions Christian Louboutin To Design Its Christmas Tree Yet

It’s beginning to look a lot like Christmas at Claridges. The Mayfair hotel has revealed Christian Louboutin as the designer of its famously ornate festive tree. A long-time guest and friend of the legendary establishment, Louboutin will unveil his creation in the lobby on 21st November.

“The design is a bit of a secret at the moment, but as a clue, I’ll be bringing a little bit of Paris to London,” the shoe designer extraordinaire tells Vogue. “London is a very special place for me, it’s so close to Paris but at the same time it’s so different. I’ve been visiting a lot recently to design the tree, as well as working on some of my other projects.” An ephemeral boutique in the city’s historic Burlington Arcade and a Royal Ballet collaboration inspired by the Christmas production of Sleeping Beauty is also in the pipeline for December. 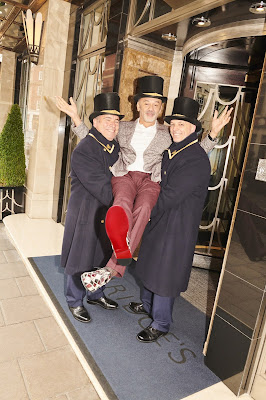 Louboutin is already feeling the seasonal cheer. “Christmas for me is about magic, celebration and lights, but more than anything, it’s all about family,” he shares. “It’s a moment where I can step out of the craziness of travelling and sketching, and be fully committed to the people I love.”

The partnership marks the 10th year that Claridges has invited a creative visionary to put their stamp on the hotel’s decor. Karl Lagerfeld, Christopher Bailey, John Galliano, and Domenico Dolce and Stefano Gabbana have previously lent their sartorial prowess to the statuesque fir, while Jony Ive and Marc Newson have brought conceptual flair to the London landmark.

Posted by FASHIONmode News at 1:35 PM