So California has become the first state to ban fur. This sounds draconian. What does that actually mean? It is true that on Friday the state’s governor, Gavin Newsom, signed AB44 into law, which bans sales of new clothing and accessories (handbags, shoes, pompoms, key chains, you know) made of fur. But that does not mean that California is saying sayonara to all fur.

For the purpose of the law, fur is defined as “animal skin or part thereof with hair, fleece or fur fibers attached thereto.” For the purposes of shoppers, that means mink, sable, chinchilla, lynx, fox, rabbit, beaver, coyote and other luxury furs. Exceptions have been made for cowhide, deerskin, sheepskin and goatskin. Which means that shearling is totally fine. Exceptions have also been made for religious observances (shtreimels, the fur hats often worn by Hasidic Jews, can continue to be sold) and other traditional or cultural purposes.

Fur that is already in circulation can remain in circulation. So your grandmother’s astrakhan stole is safe. So is any aviator jacket. But how will anyone know if the fur you are wearing is old or new? The law is really about the selling of fur, not the wearing of fur. After all, it is perfectly legal for any California resident to travel to, say, Las Vegas, buy a big fur coat and show it off back home. Some fur partisans are nonetheless concerned that because it is hard to tell what is new fur and what is old fur, they will be ostracized or otherwise seen as having done something illegal if they appear in public in a fur garment. That is a legitimate worry. 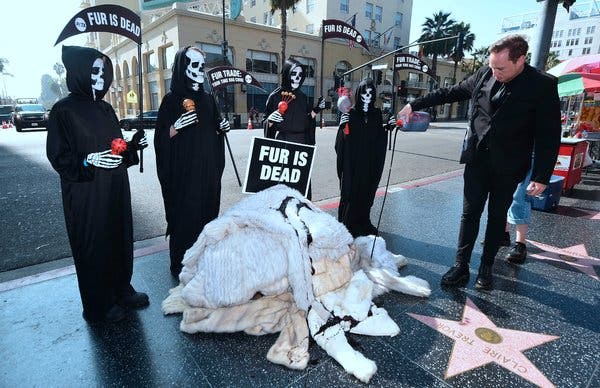 What happens if a retailer cheats?

If retailers break the law, they risk incurring civil penalties, including a fine of up to $500 for a first offense and $1,000 for multiple offenses.

I’ve been hearing about various fur bans for a while. This isn’t the first one, is it?

California is the first state to ban fur, but it is following the lead of a number of its own municipalities, including Los Angeles, San Francisco and Berkeley. A variety of countries have banned fur farming, including Serbia, Luxembourg, Belgium, Norway, Germany and the Czech Republic. And similar bills banning fur sales have been introduced in New York City and Hawaii, though they have yet to become law.

Could New York City be next?

Not really. Over the last year numerous brands have jumped on the no-fur bandwagon, including Stella McCartney, Gucci, Versace, Coach, Chanel, Prada, Burberry, Michael Kors, Giorgio Armani and Tom Ford. H&M, which is not exactly a haven of mink coats, has said it will no longer use mohair. One of the few holdouts is Fendi, which began life as a fur house, still has five outlets in California that sell fur and even has “haute fourrure” fashion shows once a year during couture. (Fendi did not respond to requests for comment on the ban.)

Still, all of this just-say-no-to-fur is not quite the sacrifice it sounds, since for many brands fur makes up a very small percentage of sales (at Coach, for example, fur accounted for less than 1 percent of its business). In California, it was an especially tiny percentage. This is true for department stores, too. Saks does not even have a dedicated fur salon in its California stores. On the other hand, fur is still popular in Miami. Cameron Silver of the vintage store Decades said in an email that while there was “a waning interest” in fur in California, “preloved fur pieces” tend to be the first to sell at trunk shows across the country.

Why is all this happening now?

The anti-fur movement has been growing for a while, but between the general conversation about the climate crisis, a raft of books like “Eating Animals,” by Jonathan Safran Foer, and the sense that fur feels very last century, and contrary to millennial value systems, consumer sentiment has begun to swing against it. And whither consumers, so, too, those that sell to them.

It makes sense, so what are the arguments against it?

They range from fur being a meaningful part of national industry, generating $1.5 billion at retail in the United States, according to the Fur Information Council of America, and accounting for more than 32,000 full-time jobs - to the fact that many of the fake alternatives are made from petroleum and other plastic-based synthetics and are generally regarded as entirely disposable, which means they end up in landfill, which means fake fur is probably worse for the environment than real fur, which is almost never thrown away.

In addition a number of communities, including African-Americans and Hasidic Jews, see fur as an important part of their cultural heritage, one on which lawmakers should not be permitted to impose their own voter-pandering morality.

Retailers are gaming out all sorts of possible scenarios. PETA is currently lobbying, with some success (see: ASOS) to ban the use of cashmere, silk, down and feathers. As a result, there have been a lot of doomsday scenarios floated about the slippery slope we are poised to tumble down.

Keith Kaplan, of the Fur Information Council of America (F.I.C.), issued the following statement after the California news broke: “This issue is about much more than animal welfare in the fur industry. It is about the end of animal use of any kind. Fur today, leather tomorrow, your wool blankets and silk sheets and meat after that.”

Posted by FASHIONmode News at 6:28 PM