What fear is more all-consuming, more persistent, and more human than the fear of seeing oneself? Whether it’s the frowning, double-chinned self one sees when accidentally opening the front-facing camera on a phone or the midnight terror of glimpsing of one’s reflection in the bathroom mirror, our existential dread is always lurking in the wings.

In theaters, you can currently terrify yourself with Jordan Peele’s sophomore film, Us, which hinges on the notion of doubles inhabiting this Earth not so peacefully alongside the “real” things. Over the past 2,000 years, we humans have developed plenty of other superstitions about ourselves. See your doppelgänger and you die, or at least go mad. Cover the mirrors in your home after a death, lest the phantom return. The phrase “know thyself” wasn’t drummed up by a philosopher—though it was popularized by one—but rather inscribed at the entrance of the oracle at Delphi’s temple, maybe as a warning about what we would learn inside. To be haunted by oneself is so human a compulsion we have stripped The Other of the fear: Vampires don’t have reflections at all. 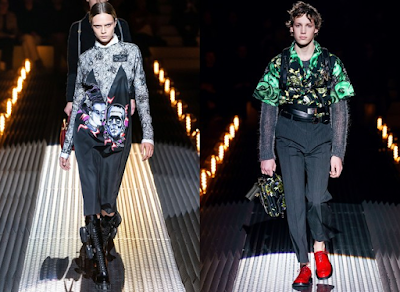 To attend a fashion show is to see nothing but slightly better versions of oneself. That’s aspirationalism. But to attend fashion month, is to see this parade of potential yous several, if not dozens, of times a day, every day for a month. That’s not even the scariest part! Not only do the collections start to bleed into each other, doubling up on ideas, silhouettes, and models, but archival collections are being revived with Frankensteinian ease, past loves reanimated on the runways and brought back from the dead for millennials and Gen Z-ers to get a chance at being grunge or glamorous. There’s also the telling habit of the modeling industry to tout models plucked from obscurity as “the next Kate Moss,” “the next Jane Birkin,” or “the next Naomi Campbell,” promising a slant doppelgänger of a known beauty. 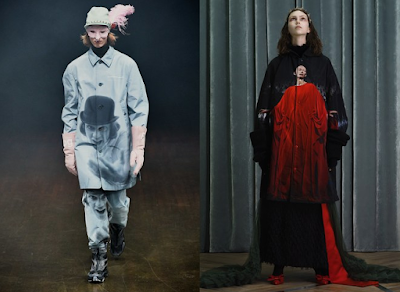 If this isn’t uncanny enough to make you think twice about your reflection and its wardrobe, there’s also the matter of the many obvious references to fear, horror, and terror on the Fall 2019 runways. At Balenciaga, models wore bloodred contact lenses like cyborg contract killers. Demna Gvasalia’s own collection, Vetements, explored the frights of the dark Web. Comme des Garçons’s Rei Kawakubo called her show “a gathering of shadows” and assembled her models in a ritualistic circle for the show’s close. Rick Owens asked the Instagram drag star Salvia to consult on an alien makeup look complete with black contact lenses that turned models’ eyes into infinity pools of inky nothingness. 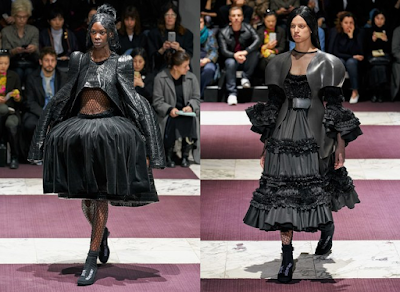 Even Mrs. Prada fell under the spell of scary stories, including Jeanne Detallante’s illustrations of Frankenstein and his bride as a print in her Fall 2019 men’s and women’s collections. After the menswear show in January, she said, “Mainly I was interested in the understanding of humanity: weakness and the more delicate and naked aspects of humanity also. The rejected . . . the one who doesn’t have a career.” Placing her collection against the backdrop of our current moment of military and social strife, she added, “Because fashion has to be light somehow, we borrowed the symbols of trashy horror movies—from Frankenstein to The Rocky Horror Picture Show and all those movies. Frankenstein is the example of the monster with a big, big heart who searches for love.” 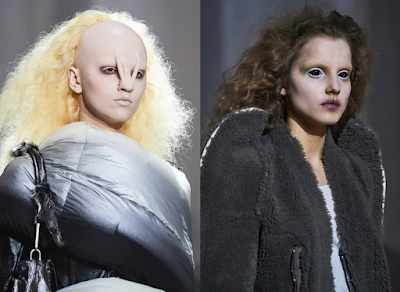 If Mrs. Prada’s scary story is one of redemption and romance, Jun Takahashi’s is one of pure shock. At Undercover, Takahashi has turned his men’s and women’s collections into chilling sagas. His recent Fall 2019 menswear outing explored what it might be like if no less than a time-traveling Edgar Allan Poe met up with A Clockwork Orange’s Alex DeLarge—a meetup that is especially uncomfortable considering film’s treatment of women and the female body. For his womenswear collection, he pulled stills from Suspiria, Luca Guadignino’s remake of the Dario Argento original, which brought bodily gruesomeness to new levels. Tilda Swinton appears in character as Madame Blanc, the headmistress of horror at Berlin’s Tanz Dance Academy, in a witchlike cloak. He’s done The Shining’s Grady twins, 2001: A Space Odyssey’s Hal, and other Kubrick-inspired terror trips in the past. 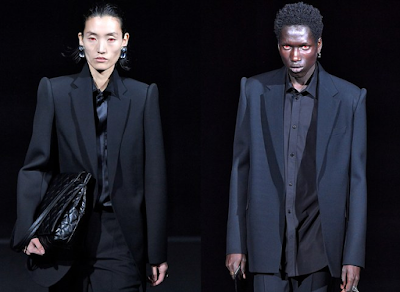 Why is all this spooky-scary style trending now? The most common interpretation chez Vogue is that fashion is reacting to the tumult of our actual world. But is wearing your fear conquering it? Perhaps there’s a more feminist undertone at play as well. For centuries, women have been the unwilling victims of scary stories, until Mary Shelley came about with a stake to the heart of male-dominated horror. This year’s most popular horror films have had female heroines—see Hereditary, Annihilation, and Us.

Or maybe it’s that fashion is an industry that constantly asks us to confront ourselves and our own existential dread. (Hey, there’s got to be a reason Gigi Hadid is reading Camus’s The Stranger, while her sister Bella is deep into Stephen King’s The Outsider.) In researching the horror stories that haunted the Fall 2019 runways, I even found myself engaged in a personal terror. I realized—thanks to Google—that I had written an article about the spooky side of fashion not once, but twice before. For all of its trendiness and of-the-moment-ness, fashion can sometimes feel absent from time or a champion for the flattening of it, constantly repeating itself, rehashing its best ideas, reanimating itself over and over again. It’s not a bad quality. Just like the people inside the clothing, the fashion industry is constantly introspecting. Know thyself—and know thy closet.

Posted by FASHIONmode News at 6:28 PM