It was a family affair at the London premiere of Maleficent: Mistress of Evil, as Angelina Jolie wore her most ornate custom tour look to date alongside her children, Zahara, Shiloh, Vivienne and Knox. The glittering silver gown with gold bodice detailing and diaphanous back draping is the work of Ralph & Russo – the first British couture label in a century to gain admittance to the Paris’s Fédération de la Haute Couture in 2014.

The connection between actor and couturier has long existed off the red carpet. Jolie collected her honorary damehood the same year wearing an immaculately cut dove grey skirt suit by the house. It was emblematic of the wealth of separates interspersed among Ralph & Russo’s fairytale gowns that cater to the brand’s young clientele – a fan base that has allowed the brand to quietly rule the couture game since it set up shop in Knightsbridge in 2007. 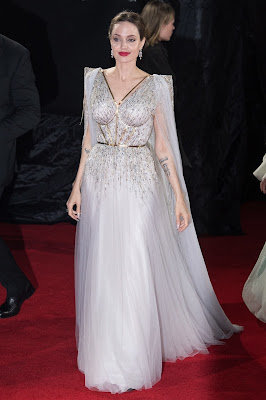 Speaking of those red-carpet ready gowns dripping in embellishment, the Australian-born couple (Tamara Ralph acts as creative director while Michael Russo is CEO) created a bespoke look for Jolie to wear in her titular role in the Disney film. If the elaborate beadwork on the actor’s London gown – and, indeed, the gold fringed autumn/winter 2019 couture look she wore at the Japan premiere – is a barometer of what to expect, hours and hours of painstakingly detailed work will have gone into the costume.

The shimmering silver confection, which Jolie accented with Cartier High Jewellery, is also a departure from the Maleficent promo looks that have been leading to London. The bewitching black Atelier Versace gowns with their perfect corsetry seem to have referenced the impactful uniform of Jolie’s villainous character in the film series. Whether her shining Ralph & Russo gown is a reflection of Maleficent’s evolution in the film remains to be seen, but one thing is certain: Jolie always uses the red carpet as a platform to show off the spoils of her relationships with the world’s most respected couture houses.

Posted by FASHIONmode News at 11:16 AM