In news that could make Carrie Bradshaw stumble in her Manolos, Sarah Jessica Parker has revealed she finds shopping anxiety-inducing. “I’m not a crazy shopper. And haven’t been for many years,” the former Sex and the City star quipped to Australian radio host Fifi Box, one third of the Melbourne-based Fifi, Fev & Byron show.

“I think I used to be a little more so but shopping can sometimes give me anxiety. I feel bad, do you know what I mean?” Parker continued. “I buy something and I’m like, ‘uh do I really need that? Will I want that in five years? Is that going to look good on me in five years?’” Parker lamented, adding,“You know I keep thinking like, ‘Oh, what about when I retire? Which Matthew’s like, ‘we’re never going to retire’”. 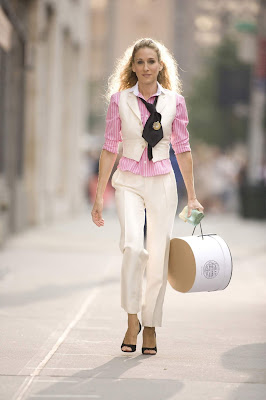 While it's comforting to know Parker suffers from similar shopping-related afflictions as the general public, it's equally comforting to hear that she may never retire — and for that, we are grateful. It's worth noting that Parker was in Australia to launch her shoe line, SJP Collection. So while the mother-of-three may find herself in some distress when it comes to consuming clothing, she still seems to take direction from Carrie Bradshaw where shoes are concerned.

“I always say it’s like a fever for her,” Parker asserted of her onscreen character's shoe habit. A fever many have no qualms with.

Posted by FASHIONmode News at 11:57 AM