Paris Fashion Week: What To Watch Out For

The final Fashion Week of the autumn/winter 2017 showcase is upon us and already there is plenty to talk about. Simon Porte Jacquemus presented showgoers with a new mood of femininity at his eponymous show yesterday afternoon; Anthony Vaccarello's second collection for Saint Laurent was unveiled last night, and with it a more gentle Seventies feel than his debut back in October; while day two started with all eyes on French conglomerate Kering, which announced that it has terminated the contracts of two casting agents accused of mistreating models at the Balenciaga casting this week.

While the negative note remains a major point of discussion, the next six days hold much to look forward to, including Clare Waight Keller's final show for Chloé tomorrow morning. The creative director, who has been at the helm since 2011, announced her departure from the house in January, confirming at the time that her last day would be March 31. That, however, doesn't mean to say that we will have to wait until then before her successor is named. With all eyes on Natascha Ramsay-Levi to fill her shoes, many suspect an announcement to come towards the end of this week, following the celebratory party that the Richemont-owned brand is throwing in Waight Keller's honour tomorrow night. 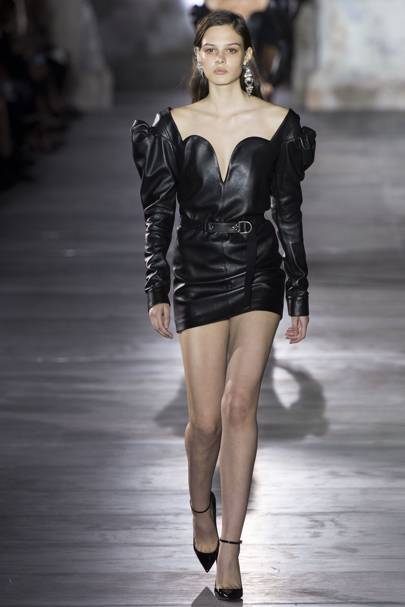 Another seat that remains to be filled is that of Givenchy's creative director. Following Riccardo Tisci's exit after a 12-year tenure last month (the brand has elected to come off the official schedule this week and hold private appointments instead) whoever his replacement is will be tasked with making their mark - no easy feat given Tisci's distinctive, and critically acclaimed, design aesthetic that made the brand instantly distinguishable on the runway and red carpet alike. Names linked with the role include Peter Dundas, Hedi Slimane, Clare Waight Keller and Peter Copping, although Off White's Virgil Abloh (who will show his collection for the brand tomorrow evening) has emerged as a favourite in recent weeks.

Also in Paris, the New York Metropolitan Museum of Art is making the most of having the world's fashion press in one place, with its curator Andrew Bolton flying over to reveal the first official details of the forthcoming Costume Institute spring 2017 exhibition, Rei Kawakubo/ Comme des Garçons, Art Of The In-Between showcase set to be unveiled in May.

Posted by FASHIONmode News at 3:03 PM