Meryl Has The Final Say In Her Oscar Dress Saga

While the Oscars are undoubtedly about celebrating cinematic talent, a major component of the ceremony is, of course, what the stars choose to wear. Never has it been quite so controversial as with Meryl Streep's dress choice though.

Streep stepped out on the occasion of her record-breaking 20th nomination in an embellished navy Elie Saab gown after castigating the long-term Chanel creative director Karl Lagerfeld for defaming her.

According to a WWD interview with Lagerfeld, the celebrated actress requested a dress from the French house's recent couture collection be modified in its atelier so that she could wear it for the occasion. “I made a sketch, and we started to make the dress,” Lagerfeld told WWD. However, the designer revealed that shortly afterwards, he received a message that said: "Don’t continue the dress. We found somebody who will pay us."

“After we gift her a dress that’s 100,000 euros, we found later we had to pay for her to wear it. We give them dresses, we make the dresses, but we don’t pay,” Lagerfeld continued, adding, “A genius actress, but cheapness also, no?” 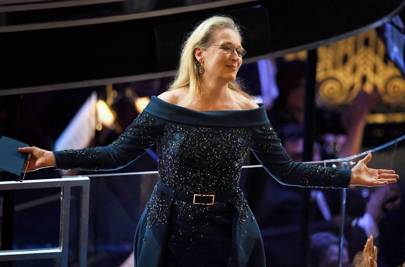 The WWD report continued to say that should Streep decide to wear the gown, it is still hers for the taking. “She could keep the dress because of the size,” Lagerfeld said. “It’s couture. It’s perfect for her.”

The designer later issued a statement saying he had "misunderstood that Ms Streep may have chosen another designer due to remuneration" and said he regretted the controversy.

In a statement issued by Streep, she said Lagerfeld "defamed me, my stylist and the illustrious designer whose dress I chose to wear, in an important industry publication. The story was picked up globally, and continues, globally, to overwhelm my appearance at the Oscars, on the occasion of my record-breaking 20th nomination, and to eclipse this honour in the eyes of the media, my colleagues and the audience."

Oscar host Jimmy Kimmel started the Academy Awards ceremony with a spontaneous round of applause for Streep "for being an underrated actress", before asking if her dress was an Ivanka design.

Posted by FASHIONmode News at 2:35 PM