How Adriana Is Protected By The Angels

Adriana Lima believes she is protected by angels. Not the crystal-winged, lingerie-wearing Victoria’s Secret variety, of whose number she is the longest-serving, but rather the celestial beings.

“The church is in me - I always connect,” she told Miami’s Ocean Drive magazine of her way of going to church every day without actually attending the chapel. “If you’re connected with the divine and always have pure intentions with everything you’re doing, you’re protected by the angels. I’m very spiritual. I believe in nature, I believe in energy, I believe in spirits.” 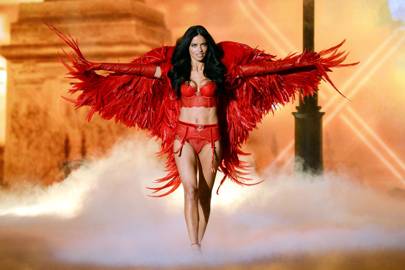 And it’s not just angels that the model believes in. She uses crystals - “I don’t count, but I have a lot - more than 50” – preferring amethyst, which purports to make users calmer and more patient, and aids meditation. She also admits that she’s sure we’re not alone in the galaxy, believing that aliens exist.

“I don’t picture them as, like, coming to get me or abducting humans,” she said. “I imagine they maybe look like us but with a higher intelligence and connection to the universe.”

Posted by FASHIONmode News at 9:29 AM