She used to be the artistic advisor of French fashion house Emanuel Ungaro (no, honestly, she did - it's right here), and now Lindsay Lohan is turning her hand to design again. The actress revealed the new project in an Instagram post this weekend, which didn't tell us much about the project, but gave us a hint.

Ungaro wasn't Lohan's first (or last) fashion foray. She launched a clothing line called 6126 in 2008, specialising in leggings, but it's entirely possible that this new creative outing will be considerably more demure. 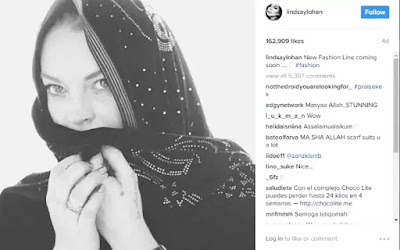 The star has been photographed wearing a headscarf recently - even revealing via social media her dismay at being asked to remove it while passing through US customs - and the picture she used to accompany her announcement depicts her in a jewelled hijab. Whether her collection will feature her new more modest taste remains to be seen.