Chanel and Fendi have come together to stage a memorial for Karl Lagerfeld in collaboration with the late designer’s eponymous brand. “Karl For Ever” will be staged at the Grand Palais – the iconic Paris venue that was transformed into the fantastical settings of his Chanel shows since 2005 – on the evening of June 20 during Paris Men’s Fashion Week.

On the main stage in the venue, a rotating cast of creatives will perform dance, music and theatre sketches based on work admired by the former creative director. The stage, along with the two bars the 2,000 guests will meet at for a toast, will be wrapped in aluminium sheeting, a material that Lagerfeld loved.

“This whole thing is all woven and sewn together with Karl in mind, aiming to get the sense of proportion and detail he was so good at,” Carsen told WWD of the intricacies surrounding the project. “I wanted something full of life and unexpected... He once famously said, ‘A funeral? I’d rather die.’” 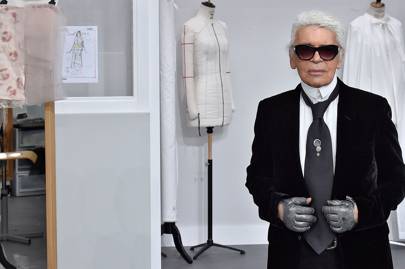 “It will be a very powerful moment, a collective celebration of his persona,” commented Pavlovsky. “The memorial will be about Karl only: who he was, what he loved, what gave him his exceptional energy. I am glad we could join forces with Fendi and Karl Lagerfeld to create together an exceptional event that measures up to him, a tribute that truly celebrates the things he loved and that inspired him.”

Since Lagerfeld died on February 19, the insurmountable loss of one of the industry’s leading creatives has been recognised in a number of ways. Chanel and Fendi, the two fashion behemoths that he steered towards success during his lifetime, both played David Bowie’s “Heroes” during the finale of his last autumn/winter 2019 collections. Chanel organised a minute’s silence at the start of the alpine-themed presentation, while Fendi screened a video entitled “54 years together” depicting Lagerfeld drawing a sketch of himself on his first day at the company.

The former additionally placed an illustration on each of the audience’s seats reminding them, “The beat goes on”, while the latter left small cards for guests, inscribed with Lagerfeld’s signature and the date of his passing. Both were apt acknowledgments of a designer who was famously anti-sentimental and preoccupied with the future, rather than ever slipping into nostalgia. “Things start with me, they end with me,” Lagerfeld once told Suzy Menkes. “After that, the garbage can. I hate the idea of being heavily remembered.”

As per his own request, there was no public funeral after Lagerfeld died, only a private service in Nanterre. “The greatest tribute we can pay today is to continue to follow the path he traced by – to quote Karl – ‘continuing to embrace the present and invent the future’,” Pavlovsky said about the wishes of his collaborator. Serge Brunschwig, Fendi chairman and CEO, reiterated this sense of moving forward, and declared that Lagerfeld had left the Fendi family, of which he was an honorary member, “an enormous heritage, an inexhaustible source of inspiration to continue”.

Posted by FASHIONmode News at 1:56 PM