Charlotte Casiraghi – the daughter of Caroline, Princess of Hanover and granddaughter of Princess Grace – wed film producer Dimitri Rassam in a civil ceremony at Monaco’s Prince’s Palace on June 1. The bride, who is the 11th in line to the Monegasque throne and a competitive equestrian and model, said her vows in a short lace brocade Saint Laurent dress with long sleeves and three bows down the front.

Royal watchers were quick to say that Casiraghi likely drew inspiration from the similar-looking champagne and pink brocaded suit that her grandmother wore to her own civil ceremony to Prince Rainier in 1956. That dress – like her iconic wedding gown – was created by costume designer Helen Rose. Rassam is the son of French actor and model Carole Bouquet. He and Casiraghi have a six-month-old son named Balthazar together, in addition to each having a child from their previous relationships. 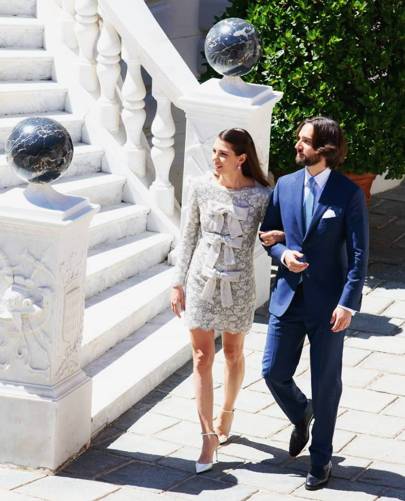 The couple, who has known each other for a long time, reunited in Paris over Christmas in 2016. Two years later, Rassam proposed with a pink diamond solitaire while on a family ski holiday. Prince Albert II, his wife Princess Charlene, and their children Princess Gabriella and Prince Jaques were in attendance at the ceremony alongside the bride’s mother, Princess Caroline, Casiraghi’s brothers Andrea and Pierre Casiraghi and her half sister Alexandre de Hanover. After the service, the royal family hosted a traditional Monegasque-style picnic for their guests in the terraced gardens overlooking the Mediterranean.

Later in the evening, everyone headed to the Monte Carlo Beach Hotel for a formal dinner and dancing. Casiraghi switched into a strapless satin Chanel dress with a cinched waist and front sit. Her hair was slicked back and rolled into bob with an Old Hollywood feel. A three-strand Cartier diamond necklace from Princess Grace’s collection adorned her neck.

Posted by FASHIONmode News at 7:01 PM