Daniel Roseberry is fashion’s newest name to know. The 33-year-old designer has been named artistic director of Schiaparelli following the departure of Bertrand Guyon last week. Roseberry arrives in Schiaparelli’s storied ateliers inside a Place Vendôme Hôtel particular from Thom Browne, where he has worked as a designer for 11 years, spending the last five as the design director of men’s and women’s collections. Born in Texas, Roseberry studied at New York’s Fashion Institute of Technology before starting his career at Thom Browne.

“It is my great honour and my joy to pick up where Mme. Schiaparelli left off some 85 years ago,” the designer wrote in a statement, before waxing poetic on the meaning of the Schiaparelli brand. “Schiaparelli was a master of the modern; her work reflected the chaos and hope of the turbulent era in which she lived. Today, we find ourselves asking similarly big, identity-shaping questions of our own: What does art look like? What is identity? How do we dress for the end of the world? . . . It is my privilege to collaborate with the astonishing talents of the atelier and in the traditions of haute couture to carry the legend and myth of this storied house into the future.” 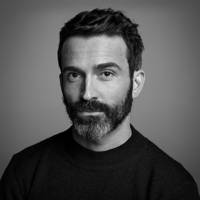 The creative shift at Schiaparelli comes as something of a surprise; not only had the brand recently launched a see-now-buy-now ready-to-wear collection that was seeing success at department stores such as Bergdorf Goodman, but it had also become well respected in Hollywood for dressing Tilda Swinton, Cate Blanchett, and Gwyneth Paltrow, among other celebrities. Several of Guyon’s pieces will also be included in the Costume Institute at the Metropolitan Museum of Art’s upcoming Camp: Notes on Fashion exhibit, including a fantastical flamingo-inspired piece.


One would expect that Roseberry will continue to mine Elsa Schiaparelli’s own obsessions with Surrealism, fine art, and fantasy in his collections. If his modestly-followed Instagram is any indication, he already has the strong sense of the irreverence and wit that defined Schiaparelli’s work-see an illustration of a hand topped with tiny stiletto boots for proof. In a press statement, the designer continued of Schiaparelli: “One of her greatest legacies may be her commitment to fantasy, her understanding that we need fantasy in complicated times. I want to offer my own answers to these questions, and offer a fantasy – a dream – that feels relevant, and necessary, for today.”

Posted by FASHIONmode News at 10:21 AM