Ariana Grande Is The New Face Of Givenchy

Ariana Grande is the new face of Givenchy. Following Instagram posts from Ariana, Givenchy's official account and creative director Claire Waight Keller, the fashion house has confirmed that the superstar will front the autumn/winter 2019 campaign, unveiled in July.

"I am so proud to be the new face of Givenchy," Grande said in a statement. "It is a house I have forever admired and to now be part of that family is such an honour. I love this clothing and the confidence and joy it brings to the people wearing it. Not only is the clothing timeless and beautiful but I'm proud to work with a brand that makes people feel celebrated for who they are, and unapologetic about whatever they want to be.” 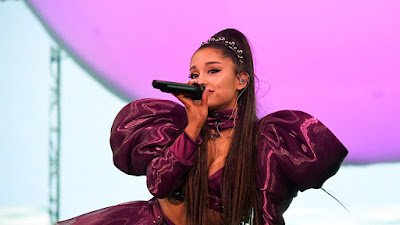 The French fashion house has a long history of collaborating with the world's biggest celebrities. Founder Hubert de Givenchy was responsible for many of Audrey Hepburn's most famous looks, and recently Waight Keller created the Duchess of Sussex's wedding gown. In the footage that has been released as a teaser, Ariana's signature top-tier ponytail steals the show while she wears a dress reminiscent of an archive design favoured by Hepburn and a pearl headband.

Currently in the middle of a mega world tour, Ariana's side-hustle also made headlines last month when a trademark for "Thank U, Next" beauty products was submitted. Previously, Ariana has worked with a number of brands including Lipsy, Guess, MAC and Reebok, while also releasing a line of perfumes under her own name. With such a major brand announcement imminent, the Met Gala earlier this week could have been the perfect opportunity for Givenchy to unveil the collaboration with Ariana Grande, however the global superstar was notably absent. Instead Waight Keller attended the event with actor Gal Gadot and tennis player Maria Sharapova.

Posted by FASHIONmode News at 9:47 AM