The key word for Vogue’s January 2020 issue is values. Interpret that as you may: monetary, ethical, sentimental. Every definition relates to the big picture: that fashion needs to reassess its value system, and quickly. We have to change the way money is invested and spent; we have to shop with brands whose values reflect our own; and we have to change the way we assign value to what we buy and wear.

Let’s start by working backward, because I think that last part is actually the most important. In fashion, the inverse of value might be disposability: If your T-shirt costs less than your Starbucks latte, you probably won’t think twice about throwing it out when it rips. Value isn’t just about price, of course; you might cherish a $50 vintage dress more than a designer bag. But therein lies the difference: You value the dress because it’s rare, or because it’s by a certain designer, or simply because it has a story. It may even be more valuable now than it was 30 years ago. Your old T-shirt, on the other hand, is hardly a treasure—and who would want it, anyway? It’s stained, it’s got holes, it’s no longer bright white.

T-shirts are among several “high-frequency basics” that tend to have a single, very short life; underwear, athletic clothes, and shoes fall into the category too. They’re items you wear through quickly, can’t be resold, and are too dingy to be donated, so they inevitably end up in the trash. An estimated 50 million tons of clothing is discarded every year, and most of it will not biodegrade in a landfill. (Synthetic materials like polyester or nylon can also leach chemicals into the earth, and if they’re incinerated, they may become carcinogenic.) The amount of time, energy, and resources that go into those trashed items is usually disproportionate to their quick turnaround; a single cotton T-shirt may require up to 700 gallons of water and may travel across several countries during production. But even if it’s stained or damaged at the end of its life, it could likely be recycled into something else, like housing insulation or even another T-shirt.

Making that clear to consumers will be key to making fashion more sustainable in the future. We’re phasing out single-use plastic and paper bags from our lives, and we should think about our clothes the same way. What will happen to this T-shirt, handbag, or sneaker when I’m done with it? In the long term, it should ultimately change the way we shop, because we’ll only buy things with legitimate value and a feasible end use. 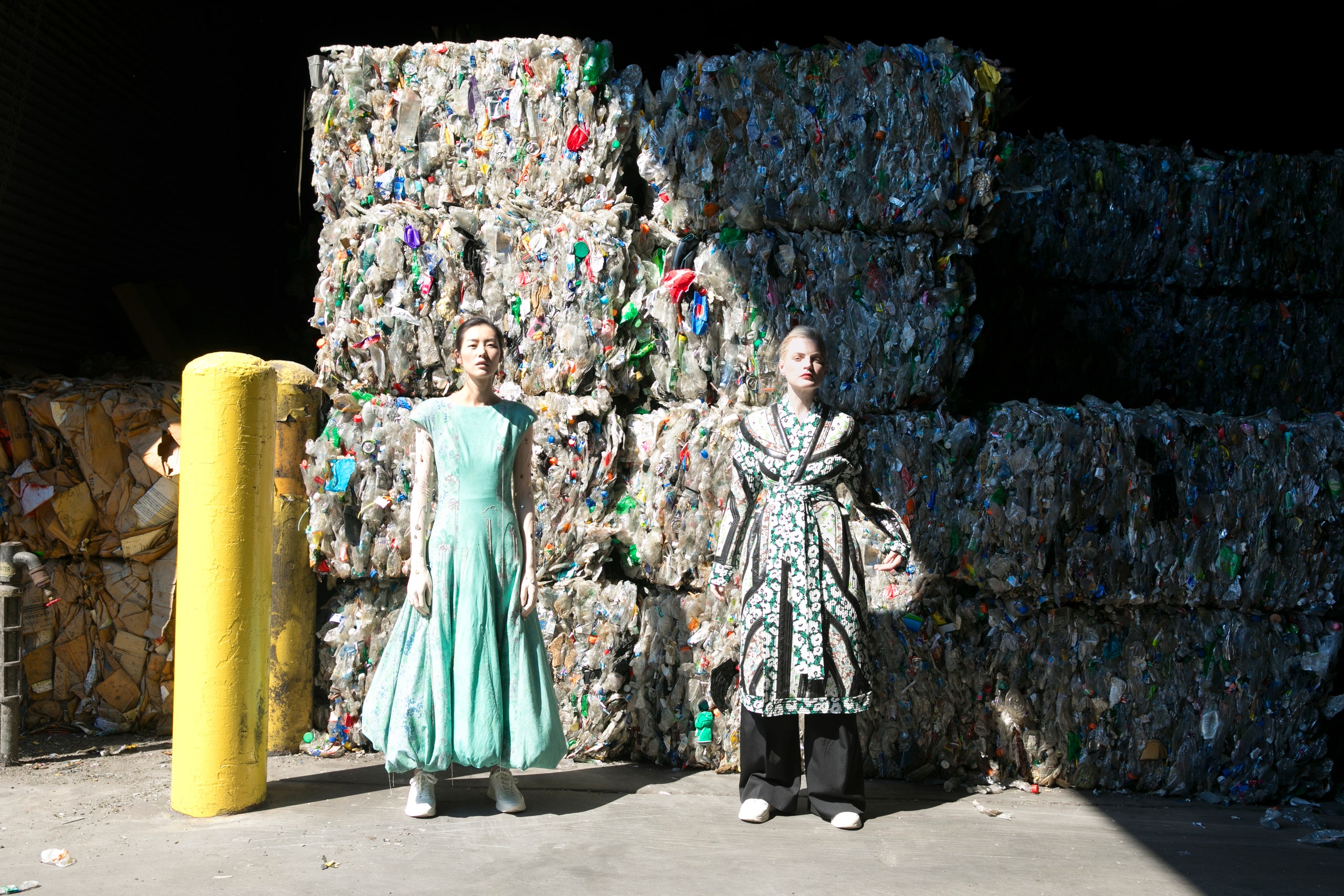 “We need to get used to looking at things and understanding that nothing actually goes ‘away’ [when we throw it out]—there is no ‘away,’” explains Stacy Flynn, the CEO of Evrnu. She came to that realization nearly a decade ago on a sourcing trip in China, where she found herself in a factory town so polluted she couldn’t see her colleague standing next to her through the smog. “I realized how impactful and damaging our industry is to the environment, and began adding up all the millions of yards of fabric I’d made over the course of my career…. I was contributing to the problem,” she says. She launched Evrnu in 2015 and recently unveiled a groundbreaking technology that breaks cotton waste down into a liquid, then remakes it into stronger, higher-performing fibers. A recent Adidas x Stella McCartney collaboration included a hoodie made from Evrnu’s regenerated cotton. “Cotton and polyester make up 90% of all clothing, and both fibers require tremendous amounts of resources,” Flynn says. “Consumers throw away about 80% of their textiles directly in the garbage. We knew if there was a way to take that waste, break it down into a polymer, and build it back up to a new fiber, that would be the lynchpin of reducing our industry’s impact.”

For all of the benefits of natural and organic cotton, hemp, linen, rayon, and so on, it’s almost always better to use what already exists. A key point in the Ellen MacArthur Foundation’s A New Textiles Economy is that fashion must phase out nonrenewable resources and move toward renewable, regenerative inputs. It’s only recently that regenerated fibers have been commercially available, though; Evrnu’s regenerated cotton is still in its prototype stage. Flynn said it will be commercialized next year and in the market by 2021. Next, her team is working on breaking down and rebuilding polyester, followed by recoverable stretch (e.g., athletic gear), then bio-based and engineered fibers (like rayon and Tencel).

“As I start to future-cast for 2025, I think this will be the new normal,” she says. “All of the products we create today will have value in the future and will naturally come back into the system. I can see a world in which consumers don’t even own the things they wear—it will be almost like a lease, where they keep it as long as they want, then return it to the owner, and it’s either regenerated or leased out again. And there’s value in the product when it comes back into the system. I think that’s the biggest catchphrase—that the product has value when it’s being designed. If there is value in the product I’m wearing today, and it will be recreated as a high-quality product tomorrow, that has an incredibly powerful business effect,” she continues. “I actually think it’s one of the greatest design challenges of our century—how we take things from one form to another, with no loss of value.”

It’s a philosophy Chloe Songer and Stuart Ahlum share for their new sneaker company, Thousand Fell. They’re tackling a similarly immense problem: 99% of all footwear ends up in a landfill, for the same reasons as those cotton T-shirts. Shoes get worn down, they get dirty, they smell, they lose their support. And in addition to their single-use nature, most sneakers are made of at least a dozen plastic parts. In a landfill, they could take up to 1,000 years to break down, eventually degrading into tiny plastic particles that make their way into the soil and ocean (and eventually our bodies). Thousand Fell’s solution is to offer vegan sneakers on a closed-loop model: Wear them out, send them back, and they’ll be recycled into other sneakers—and you’ll get a credit for a new pair. 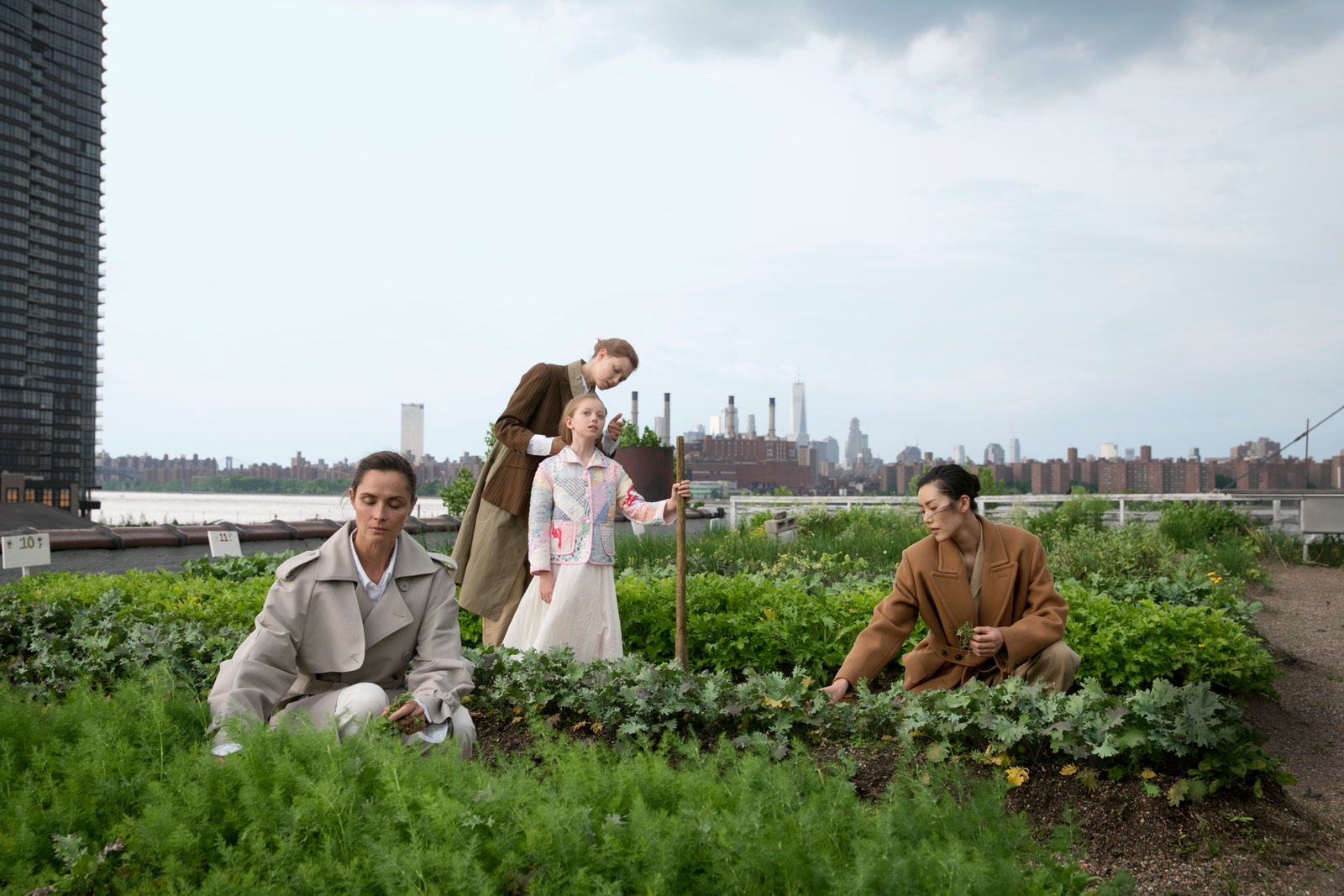 Songer and Ahlum had deep industry experience prior to launching Thousand Fell. Songer worked in business development for Alexander Wang and in merchandising at Gap, and Ahlum ran another men’s sneaker brand. For Thousand Fell, they zeroed in on white, low-top sneakers in particular because they’ve become such a foundational item in our wardrobes. (Think: Adidas Stan Smiths, Vans slip-ons, Greats Royales.) We wear them to work, on the weekend, and even out at night, and because they’re nicely priced, we don’t hesitate to buy them often. “People are replacing their white sneakers every four to six months,” Ahlum says. “They don’t know what to do with them [when they’re dirty], so they throw them in the trash chute. There isn’t a secondary market for those kinds of basic sneakers, so it falls on the brand to recycle them and have an end-of-life solution.”

Designing the sneakers for recyclability was a two-year process, and the final results feel like leather, but aren’t. (Songer pointed out that leather is commonly mistaken as natural or biodegradable, and it isn’t; most leather is treated with chromium or plastic.) The uppers are made of post-consumer plastic that’s coated with quartz for durability, and the rest is a mixture of recycled and natural rubber, aloe vera, and food waste native to Brazil, like sugar cane, coconut, palm tree leaves, and corn. The duo also insist the sneakers are built to last for eight months, not three; they aren’t encouraging you to send your sneakers back prematurely. “It shouldn’t be on the user to drastically change their behavior,” Ahlum says. “There are always going to be products people wear through quickly. There just needs to be a turnkey solution so you can continue wearing what you love every day.”

Eleanor Turner is bringing years of ready-to-wear design experience (most recently at Argent, Tory Burch, and J.Crew) and a passion for creative problem-solving to the Big Favorite, a new line of circular “first layer garments” (i.e., T-shirts, underwear, and leggings) launching in spring 2020. It’s a reprisal of a workwear brand of the same name her grandfather founded in the 1940s: “I always dreamed of reviving the brand by rethinking the idea of American legacy in a meaningful, modern way,” Turner explains. “I believe our new legacy [will be] a brand-led ecosystem where everyone can participate in doing better for themselves and the planet. One garbage truck of textiles is sent to the landfill every second, and most fashion brands stop short when thinking about the planet. I spent a decade in fashion creating what will eventually end up as trash, and used to throw out boxes of plastic hangers and samples. When I started realizing the implications of those choices, I saw them everywhere—in chemical dyes, in polyester or plastic fibers, in polybags, in shipping.” Alternatively, the Big Favorite’s model is similar to Thousand Fell’s: Order a few organic cotton basics, wear them out, and send them back to be responsibly recycled into new garments.

“Future generations will have to deal with a scarcity of resources and the consequences of consumerism in a way that we never have,” Turner continues. “Both pre- and post-consumer textiles will become an incredibly valuable commodity, and the Big Favorite is here to prove that we can build successful businesses that do better for both consumers and the planet.”

If I had to make one prediction for 2020 and the years to follow, it would be that we’ll see more closed-loop companies like Thousand Fell and the Big Favorite (and more designers linking up with Evrnu). A more sustainable fashion industry depends on using what exists, eliminating the problem of clothing in landfills, and reframing the way we value our garments. It seems entirely feasible to me that one day, all of my “high frequency” items—for me, that’s T-shirts, cashmere sweaters, camisoles, flat sandals, leather boots, and jeans—will exist on a closed loop. When they’re worn out, I’ll send them to be recycled or upcycled, with nothing wasted in the process. Everything else in my closet would be an item I really love, something I’ve purchased with the intention of keeping for a long time, be it a classic blazer or vivid floral skirt. Longevity means different things to different people, and even if I fall out of love with something, it will be high-quality enough to resell on the RealReal or Vestiaire Collective. Again, nothing wasted.

What won’t make sense in the next decade? Spending $300 on a designer T-shirt or indulging in a cheap fast-fashion thrill. Neither has resale potential—that T-shirt will suffer the same fate as a $10 Hanes tee, with pit stains, holes, and faded colors—so they’re destined for the garbage or a pile of unwanted donations in East Africa or India. Plus, the idea of owning something cheap that you only wear a few times feels pretty horrible in light of the climate crisis; once you know precisely what goes into a garment—the good and the bad—it’s impossible to shop so carelessly again.
Posted by FASHIONmode News at 10:19 AM