Raf Simons’s early interest in fashion was tied up with his love for music. Growing up in Neerpelt, Belgium, in the 1980s, the teenage Simons used to sew patches onto his clothes representing some of his favourite bands, which at that time included Kraftwerk, Sonic Youth, and Black Flag. Years later, as a designer, Simons continued to make clothes that reflected the contemporary sonic landscape. His spring/summer 2000 collection, for example, featured bomber jackets emblazoned with the logo of Rotterdam Terror Corps, a pioneering crew of the Dutch strain of hardcore techno called gabber. Two decades on, Simons is still at it. T-shirts shown in his spring/summer 2019 collection blew up the logo of famed techno label R&S to enlarged proportions. Now the designer is influencing music, as opposed to the other way around. (Take a look at A$AP Rocky’s “Raf” video if you need a reminder.)

For his latest foray into the music world, Simons is paying tribute to one of his favourite albums of all time: The XX’s self-titled debut. For the album’s 10-year anniversary, Simons created a capsule collection in collaboration with the British band (which includes members Romy Madley Croft, Oliver Sim, and Jamie Smith) that features everything from T-shirts and caps to pins and, yes, patches. The hazy images on the patches are taken from The XX’s original album art, and one can affix them (with little X pins, naturally) to the other garments in true DIY style. It’s not the first time they’ve all worked together—Simons tapped the band to play at the Guggenheim during his tenure at Dior, after which they all became friends. Simons also collaborated with Alasdair McLellan to create the band’s video for “I Dare You.” 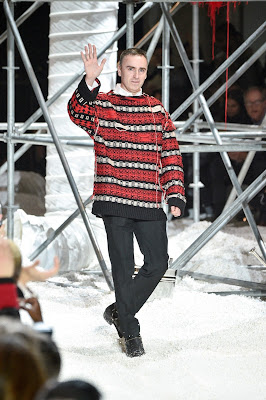 In an interview with System magazine, Simons explained what attracted him to the band’s music in the first place: “The album XX represents a very distinct sensibility linked to youth culture at the time. It succeeds in articulating and putting into words what is going on in the minds of kids when they’re dealing with love, heartbreak, friendships. And not in the stereotypical way, it seemed much more real in a way. More authentic.”

As for the band’s interest in Simons, Croft said that she first learned of Simons’s work through his practice of using band merchandise as raw material. “The concept of the DIY aspect in the 10th-anniversary merch collection, using patches and pinning them on yourself, is something that feels very teenage to me,” Croft told System. “This links nicely with the first album—we were teenagers when we wrote the songs, and I was definitely doing that kind of thing with what I was wearing,” she continued, adding that she used to get in trouble at school for cutting up her uniform. With this new collaboration, that spirit lives on.

Posted by FASHIONmode News at 7:27 AM